Ace Ventura is My Mailman

So the epic story of my boxes continues.  I last wrote on December 20th, a month after I had mailed them from the US.  At that time there was no sign at all that the boxes would ever arrive.

Shortly after the New Year, I randomly received a notice one day.  The ladies in the office got excited, as it was clearly from the post office.  It asked me to send a copy of my passport, my visa and then the original customs form.  So we messengered that along to the main post office, somewhere in the heart of Hanoi.

About a week later, I got another letter which said that boxes had arrived at the local post office and were ready for pick up.  It also informed me I needed to pay a customs fee – 30,000 VND.  Equivalent of about $2.00.

So with Ms. Linh, I  headed to the post office with all my papers.  When we arrived, the woman behind the counter and pull out a huge stack of papers, held together with one butterfly clip.  She flipped through the papers until she found my sheets.  And then a few people began retrieving my boxes from the back of the room.

The sight of the first box made my heart stop for just a moment.  And then one after another, torn, squished and lifeless boxes came out from behind the counter.  I kid you not – they truly looked like Ace Ventura had gotten a hold with them and played a few games of soccer.  This photo does not lie. 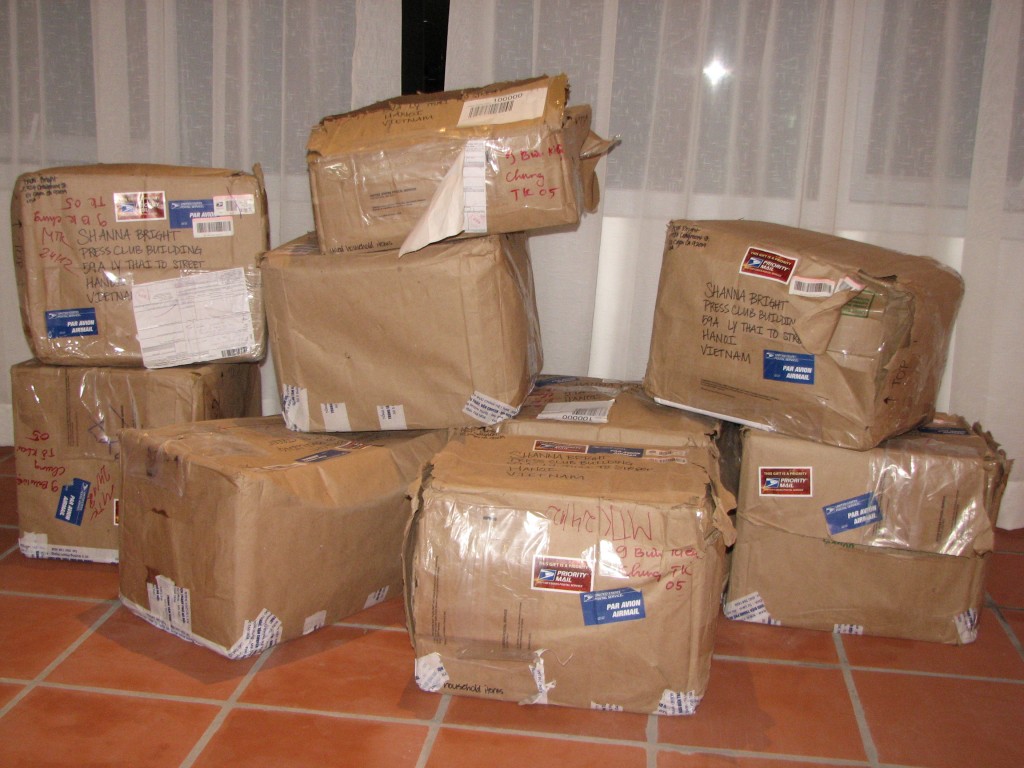 IN the end, 9 of my 10 boxes arrived, the missing one being my box of CDs.  That was not surprising to me.  And after surveying the boxes, the damage and wondering the state of the contents inside, the woman asked for my 30,000 VND.  I laughed.  I asked her who would pay me for all of the damage they had done to my things.  I asked her about the value of the missing box and who would pay me.  She didn’t find this funny.  But I put my foot down.  I told them that when my 10th box arrived, I would happily pay the 30,000 VND.  The women sounded like clucking chickens as they argued about why I need to pay the money.

Ms. Linh was good at standing firm, too.  She understood my emotions and my reasoning completely.  She said she was also worried about the contents inside and the arrival of the 10th box.  The ladies wanted me to sign paperwork and pay the money, but I refused.  I figured it gave them incentive for getting that 10th box.  (Everyone who lives in Vietnam is laughing at that statement right now.  Still, I like to give people the benefit of the doubt.)

Once home, I took photos of all my boxes in their horrid state and then began the process of unwrapping everything.  All of my boxes had been opened and much of the contents had been unwrapped.  Although in one box, I think they gave up because I wrapped everything so ridiculously much that it must have taken to long to cut the tape and layers of newspaper.  I was particularly pissed when I realized that instead of just cutting the one piece of scotch tape to open the lovely wooden boxes containing Japanese pottery, they pried open the boxes, breaking them in the process.  Can I hear a collective, “$%&!@”!!!

Only a few items ended up being broken, precious though they were.  The long-stem martini glasses I bought in Kamakura at 5,000 yen a glass is not a set of one.  Five sake glasses bought in Fuji are now three.  The bowl which Daisuke and Miyako gave all their wedding guests was too fragile to withstand the pressure of the beating those boxes took.  And really, I could have moved anywhere in the world and lost those items, so I’m quite fortunate, really.

And what do you know.  Two days after I picked up nine boxes and refused to pay the customs fee until the tenth box arrived, I received a notice that my tenth box was on its way from customs.  I have sent off my customs form and copies of my passport and visa.  Now I will wait until I hear notice that the box has arrived at the local post office.  I wonder if all of the CDs will be in the box?  And I really wonder what fee they will try to charge me.

How would you react after you paid $1300 for 10 day service and received your belongings 2 months later in this condition (minus one box)??? 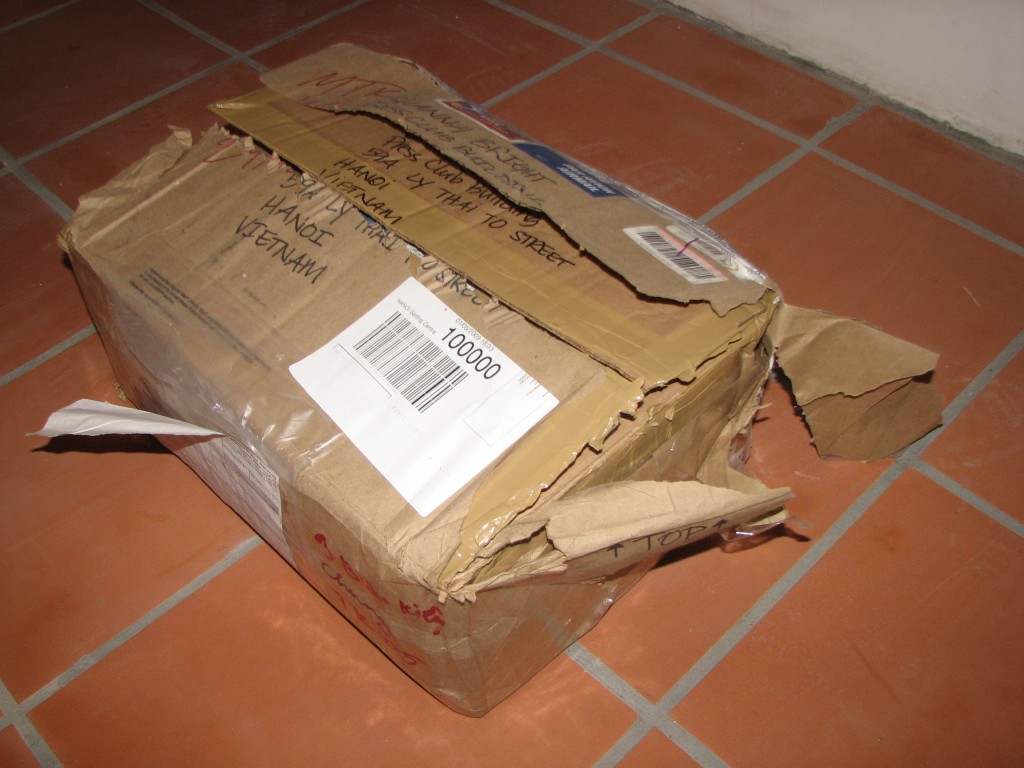 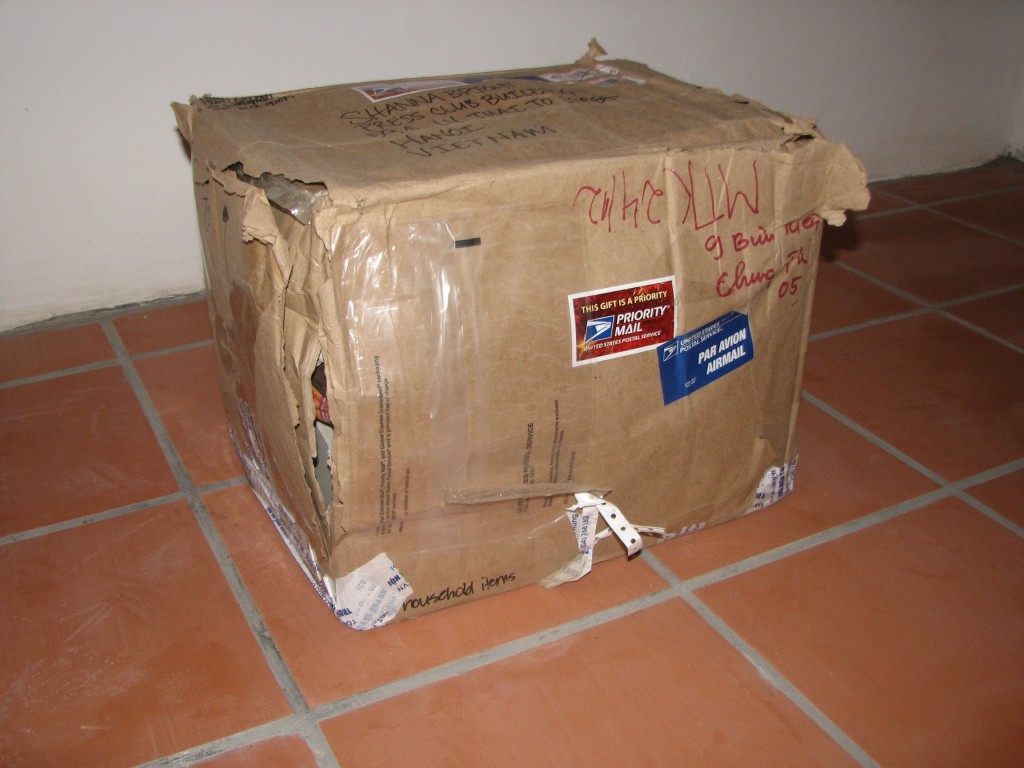