Pete and I had the great privilege to spend a lot of our time with Sith.  Pete had met Sith on his last visit to Luang Prabang, as Sith worked the front desk of the hotel Pete stayed in at the time.  Sith took us to a few sights in the city, and hung out with us for a good portion of our stay.

Sith story is so much like most young people in Laos.  He comes from a large and poor family, raised in a small village which is a long bus ride away from Luang Prabang.  He’s studying at university and working full time, seven days a week to pay for his schooling.  He works everyday so he has a place to sleep.  While Sith studies IT and has three scholarships, some of the other young men we met (significant because the young women don’t seem to be able to break out of the cycle as much as the boys) study to be a teacher or English teacher.

What was inspiring about meeting the youth of this city is that they have a vision for their future.  This is something that many in Vietnam do not have.  One young man, Sai, said that he wants to return to his village after he completes his education because he wants to see his village progress and wants a better future for his family and community.  In a situation which is pretty desperate, that selflessness is tremendously admirable.  And humbling.

Sith might be the one who is in school right now, but in the course of six days we spent with him, I learned a lot more about life than any school could teach.

What Lao people may take for granted is the stunning beauty of their country and quaint city, Luang Prabang, as well as the intriguing sight of monks walking about the city.

I’ve had several conversations over the last two years with my Lao co-workers and friends to explain that in most other countries, monks keep to themselves and certainly don’t walk about town in the same manner as you and I.  I explained that most other countries are not Buddhist, and therefore there are no temples like you find in Laos.

Part of the charm of visiting Luang Prabang is the numerous temples…some right on the main street and others tucked down side streets or off a wandering path.  And along with the temples are the many monks who study there.  It lends such a peaceful environment and beautiful setting for vacation in Luang Prabang.

While I’m sure the monks hate having their picture taken all the time (that’s why I took this one from the back), it really is fascinating to be walking down the street and pass by one or a few monks. Their robes are so brightly colored and when they pair it with another bold color…it’s just eye-catching and beautiful. And I can’t help but to take a quick snapshot!

We all know that I’ve had my fair share of conversations with monks.  But I took a bit of time this morning to visit a few temples and was delighted to meet Somchit.  He showed me the paintings and carvings he’s working on and after I bought a painting, he invited me and my friend Aeng into his room for a polite chat.  HIs room is a humble swelling, shared with one other student monk.  He wears an untraditional red robe, a gift from his friend in Thailand.  He’s about my age, speaks decent English and will remain a monk for his life.  Some men join the monastery for only a limited time in order to receive education.  Somchit enjoys his life, and therefore will devote his life to Buddhism.

My conversation with Somchit came after a short conversation with two other monks at another temple.  The rain had just begun, but I wanted to get some photos of the Mai Temple.  I met Bo and Ki, who you can see in the photo below.  Bo had the best English, and spoke rather nicely, actually.  We talked about how many students in the temple, how long they had been studying, and the upcoming end of Buddhist lent, Bun Ook Pan Saa.  In fact, Pete and I have decided to go back to Laos and enjoy this holiday near the end of October.  I told Bo and Ki that I would probably be back, and so they asked for me to come back to the temple to see the boats they will prepare for the festival.

When I finished my conversation and took a picture of Bo and Ki, I turned around to see a few other tourists gawking at the two boys as though I had just spoken to monkeys or something.  I hope if you are ever at a temple, you’ll have the courage to say hello and start up a conversation with a monk you meet.  They are usually very interested to practice their English and can be a great source of information and history about the temple and city you are in! Try it! 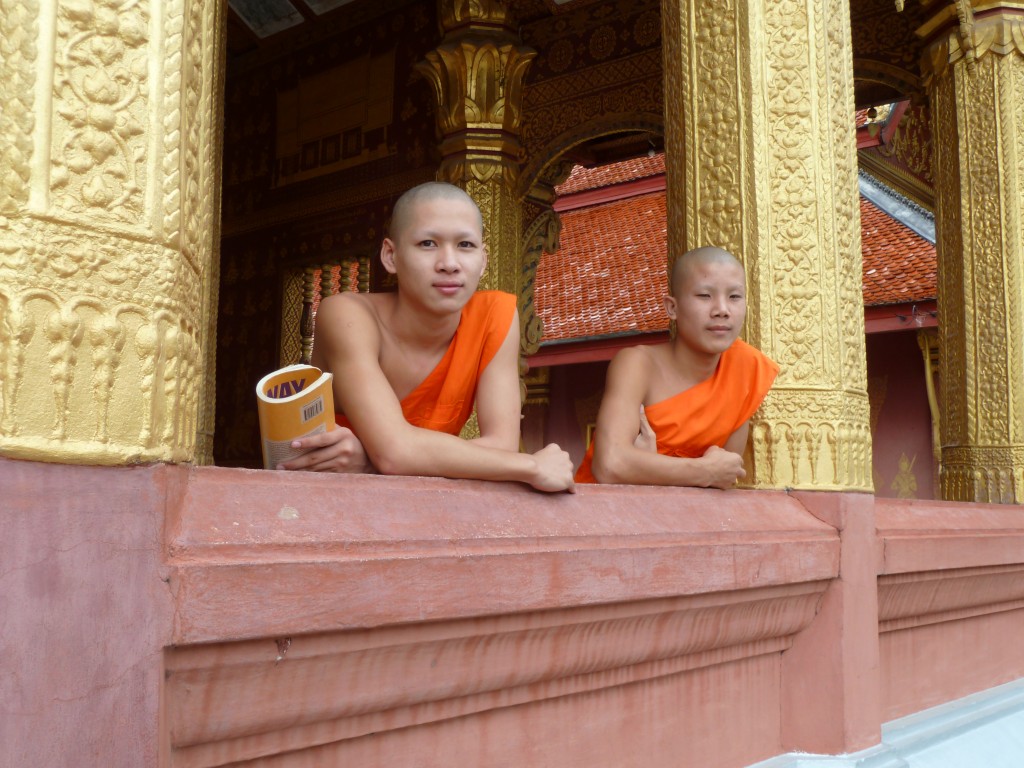 I love Lao food and the BBQ is no exception.  Much in the style of the Korean BBQ, you get a bucket of hot coals, a bowl with boil and grill space, lots of fresh veggies, meats and condiments, chopsticks and chunks of lard to coat the pan.  The Beer Lao is a great companion and all this food for all these people, plus a few rounds of Beer Lao costs only $80.  That’s for 12 people total!  Bargain! 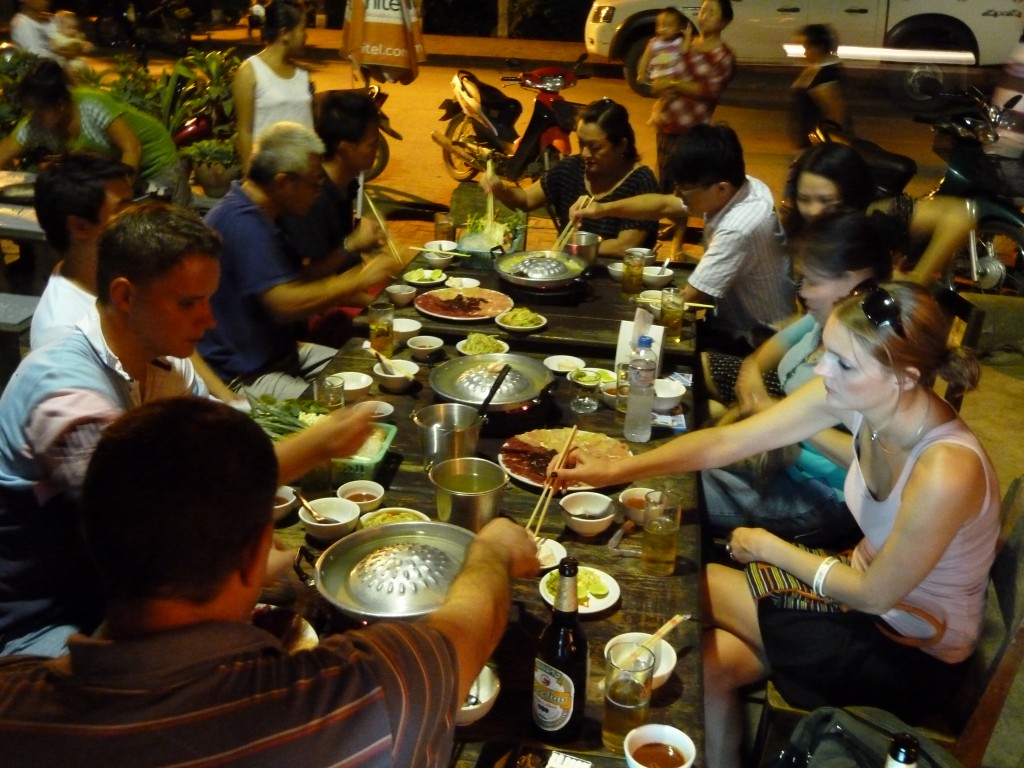 Rainy seasons in South East Asia can be kind of cool sometimes. I returned from Kamu Lodge, 3 hours up river from Luang Prabang, eager to have lunch at JOMA, a great coffee shop and bakery – quite possibly my favorite in Asia.  Just before ducking in the shop, the thunder started clapping and the dark gray clouds rolled in.

The rainy season storms are quite spectacular with lots of loud thunder, flashes of lightening and buckets and buckets of water dropping from the sky.  In about 45 minutes, the storms pass and everyone goes back to their tasks for the day as if the storm had never been there.  Me, on the other hand…well, I take pictures.  This sunny San Diego chick is still impressed!

One of the things I love about the Kamu Lodge (one of the properties in the portfolio of the hospitality group I work for) is the gorgeous nature surrounding the accommodations. It takes three hours by boat to arrive at the Lodge; it’s located on the banks of the Mekong River int he Lao forest.  The Kamu Village, an authentic and ethnic village, share the grounds with the lodge, and I always look forward to a visit to the village, as well.

I went to Laos to oversee the photo shoot of all three of our Laos properties. I really wanted to spend more than one night at the Lodge, but didn’t due to our boat schedule and other activities happening at our sales office in Luang Prabang.  It’s such a shame, as I loved taking pictures of all the green rice fields, the butterflies, lotus flowers, other bugs and plants….all the lovely nature which is so lush and lovely during rainy season….so green!

At the office; Laos

Here’s a vacation request you don’t get everyday…one I received from one of my employees in Laos:

This is Lao culture every son must become a monk for a short period to thanks parents whom gave our life. And I will be leaving from 23 Mar – 08 Apr 2010 for 15 days.

I love how this is not really a request but a statement.  Need I say that the leave was approved.

Have you ever received a strange request for time off?