I’m not sure I really knew what traditional Moroccan food tasted like.  I think I thought there were lots of spices involved, as it is a country which is known for its spices.  So call me surprised when I didn’t find the food to be all that flavorful.  In all my time there, I had just 3 good meals.  The first was at my riad in Essaouira.  After eating really bad food at the cafes, (I even tried a pizza one day to have something “normal” and was sorely disappointed.  How do you screw up a pizza?) I asked the staff at my riad to prepare dinner for me.  That was a good meal.  A fresh salad, a delicious tagine, good wine and fresh pomegranate seeds for dessert.  Yummy.

The second meal came while on my camel ride in Essaouria.  On the banks of the sea, a little man in a tent cooked up the meal you see pictured here.  The salad was simply tomatoes and onions.  The tagine here is chicken with tomato, onion, olives and a variety of parsley.  Super simple and yet tasty.  The bread in Morocco is also quite delicious.  It’s a round loaf which is a cross between a pita and french bread.  Really good.

My last meal in Morroco was at my second riad, my last evening in Marrakech.  I also asked the staff to prepare something (I let them choose).  I was offered a delcius soup which was similar to a minestrone.  Then some couscous with veggies and a baked chicken with onions and such.  Also very delicious. I think the common thread to the level of yumminess is that all three of my best meals were home cooked.  Not from a restaurant.  Even at the glamorous events of the trade show, the food was just so-so.

I’m sure if I did a bit of research and more hunting, I could find some awesome restaurants in Marrakech.  I know they exist.  I know there are some terrific dishes I haven’t had a chance to try.  Again – next year! 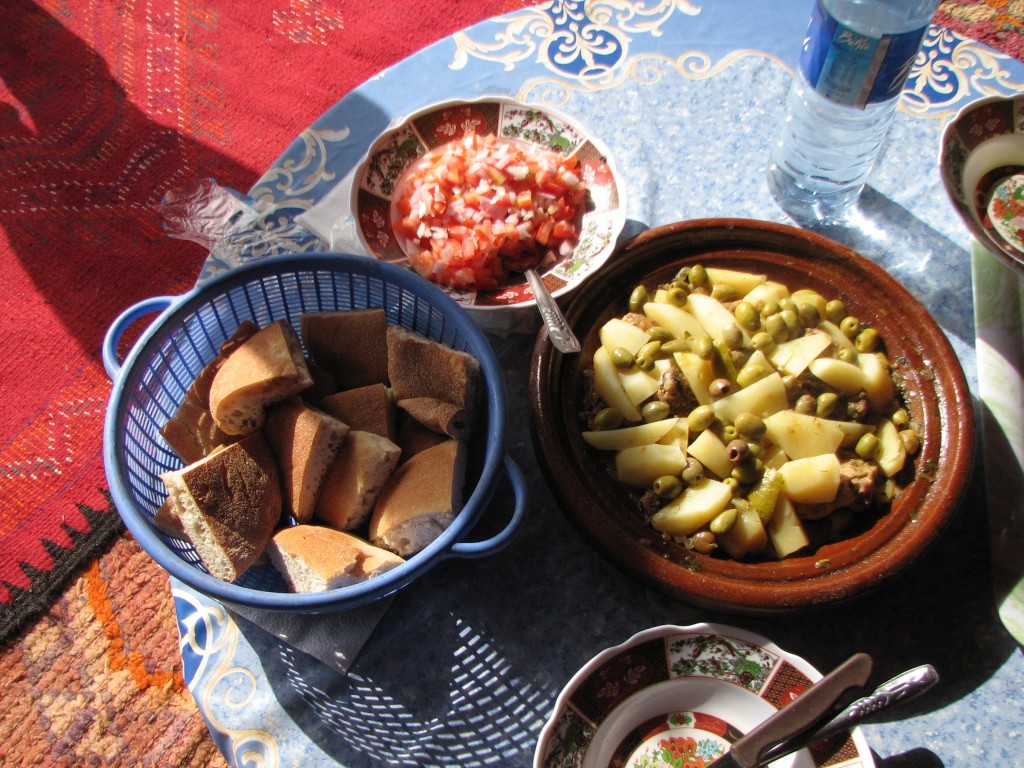 Tagine – receives its name from the clay pot it is cooked in. Over the base is a triangular top, all of which is cooked over an open fire.  It’s like an old fashion crock-pot!  Put all the ingredients in and cook!

I had to do it.  I’m in Morocco, at the beach and there are camels.  It was very touristy, but it was a hell of a lot of fun.  A full day camel trek on the beach did my back no favors, but I am so glad I did it!  I mean, when the hell am I going to ride a camel on the beach again? 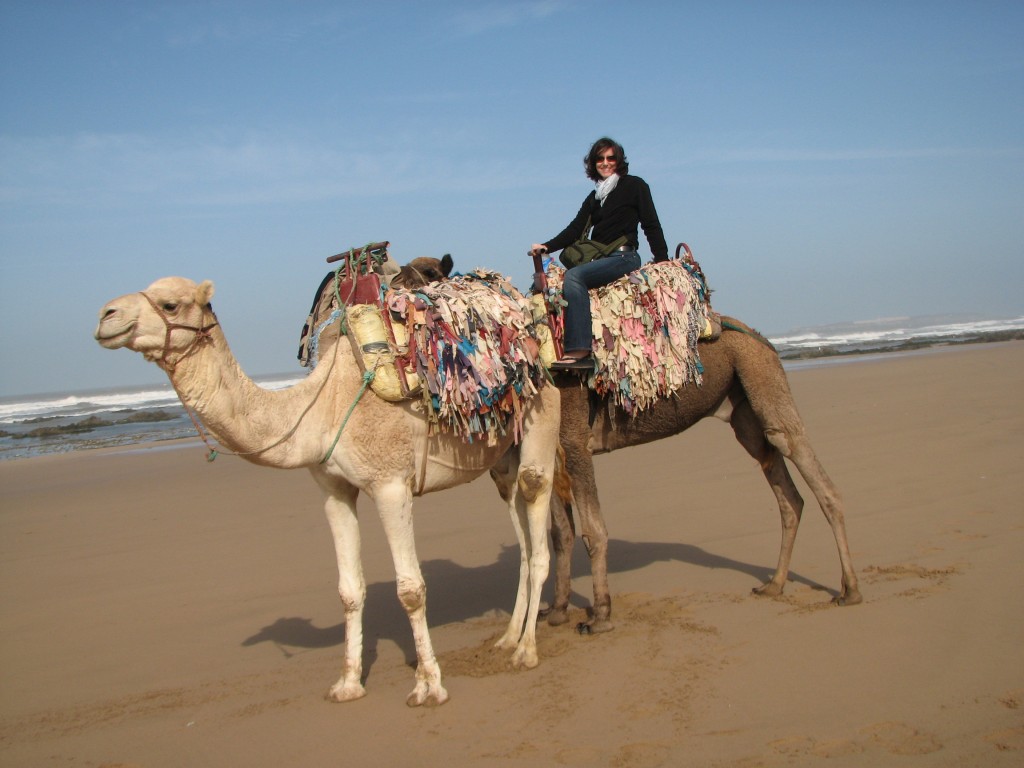 With all of the work piling up in my inbox and back at the office, I felt more than guilty to be staring at a few days of “me” time.  I nearly changed my flights and returned early.  But I remembered with distinct clarity that in the year I’ve worked with Apple Tree, I’ve taken just 2.5 days of annual leave.  That fact alone helped me not feel so guilty.  I planned for the free time when I booked my flights, just not all the internet connectivity problems in London, of all places.  That glitch really threw me out of whack.  It did nothing but put me WAY behind in work.  I already have enough to do.  I didn’t need the pressure of being so behind nor to feel culpable for taking much needed (and deserved) vacation. I stuck with my original plan and took a few days to myself.

As soon as the car peaked the hill and the ocean was in sight, my cares seemed to be swallowed up by the strong breeze from the sea, and I knew I had come to the right place for rest and rejuvenation.

(Borrowing from Wikipedia for a moment)

The present city of Essaouira was only built during the 18th century. Mohammed III, wishing to reorient his kingdom towards the Atlantic for increased exchanges with European powers, chose Mogador as his key location. He directed a French engineer, Théodore Cornut, who had been captured and enslaved, and several other European architects and technicians, to build the fortress and city along modern lines. Originally called “Souira”, “The small fortress”, the name then became “Es-Saouira”, “The beautifully designed”.

The Medina of Essaouira (formerly “Mogador”) is a UNESCO World Heritage Listed city, as an example of a late 18th century fortified town, as transferred to North Africa.

The fishing harbour, suffering from the competition of Agadir and Safi remains rather small, although the catches (sardines, conger eels) are surprisingly abundant due to the coastal upwelling generated by the powerful trade winds and the Canaries Current.

There are only a handful of modern purpose-built hotels within the walls of the old city. The medina is home to many small arts and crafts businesses, notably cabinet making and ‘thuya’ wood-carving (using roots of the Tetraclinis tree), both of which have been practised in Essaouira for centuries. 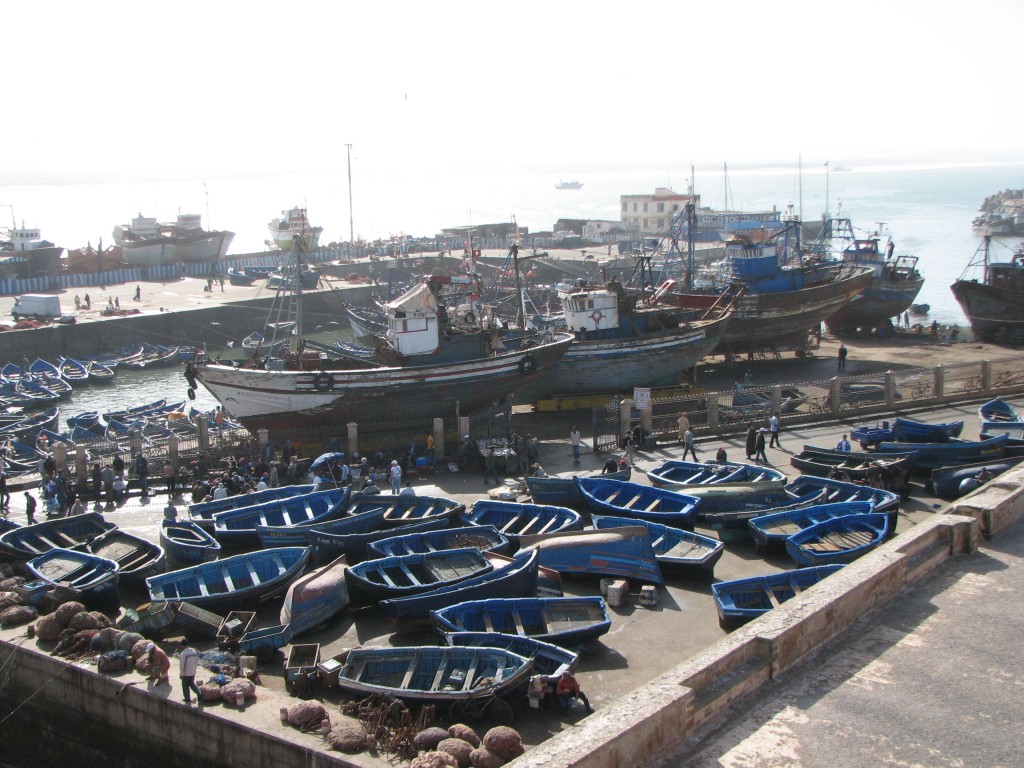 I found Essaouira to be quaint and charming.  It was low season, so there weren’t many tourists, some of the shops were closed, the cooking class wasn’t on due to the major holiday, but I enjoyed fewer people.  The weather was splendid, if a bit windy on two of the days there.  I particularly enjoyed my long walk on the beach.  Nothing like sand between your toes and the sounds of the waves to lift your spirits.  Its the San Diegan in me.  I will always love the beach.  I will always enjoy traveling to new coastlines, dipping my toes in waters all over the world.

Essaouira was just the medicine I needed.  I have been so overly freaked out about work, stressed to the max and just not myself lately.  That walk on the beach in particular was a chance for me to reconnect with the Shanna I enjoy being.  A me that I need to reclaim. Desperately.

Lost in the souks

If you’re an avid reader of my blog, you’ll know that I love markets.  You can tell a lot about a culture simply by taking a good look at life in the markets.  You can gather what food people eat, what items they may have in their home, how the locals treat each other, how they negotiate, what people wear, how much English and other languages are spoken and also how touristy the area is or revel in its authenticity.

The souks in Marrakech were fascinating to me because the paths are totally chaotic, it’s noisy, a bit smelly and crowded, except when it’s time for prayer.  There’s no real organization save a section where all of the metal works are done.  Mosques are found nearly anywhere, but I would be hard pressed to recognize a doorway without a guide.  When I walked alone, I was often the focus of attention for my blue eyes.

Moroccan men are not shy, that’s for sure.  When they would call after me in French, I ignored them.  When they figured out I speak English, a few had it in them to run after me and say, “Madamme, madamme.  One question. One question, please.”  When I would agree they would ask, “What is your name?”  Sometimes I answered truthfully and sometimes not.  On one occasion, I went with Maria.  After I answered, they would follow with, “Where are you from?”  But then I would smile and wag my finger and say, “Nope.  That’s two questions.  Have a great day.”  And I would walk away. This drove them nuts!

Usually when I am in a new place, I love buying treasures which I hope to keep forever.  I still have mementos from the Caribbean, Russia, Italy and other trips from long ago.  But oddly enough, I didn’t do that much shopping on this trip.  Of course I bought some Moroccan shoes – that was fun.  A gorgeous red pair, which would normally be worn at a wedding is a pair of shoes I will keep on display somewhere.  I bought twenty smaller pair on keychains to give out as gifts to friends and some staff at the office.  Other than that – not much else was possible.

I would have loved to have bought a lamp, some pillows, even a carpet.  But that’s not really practical with a suitcase packed for a 20 day business trip!  If we go to this show again next year, I am definitely planning and packing and shopping way differently!  I really like the Moroccan style, particularly what I saw at the 2 riads I stayed in.  So next year, Marrakech – look out!

A lot of Morocco also looks the same way I had envisioned.  But what I was not prepared for was the exquisite detail of the patterns in the tile, in the painted window shutters, the carvings in the archways.  I also didn’t expect such variety of materials used to make up one structure.

This photo is from the ancient school of the Koran.  I just loved the mix of patterns, textures, colors and shapes.  Some is wood, some is marble, some tile, and yet it all blends together so beautifully! 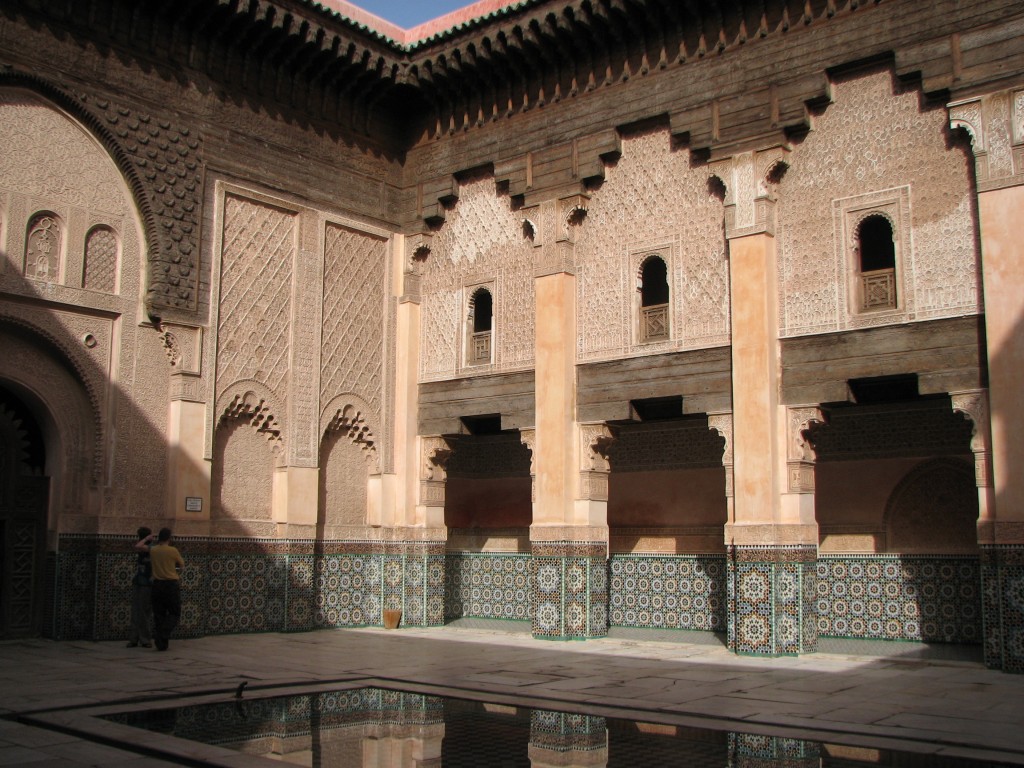 School of the Koran

Built in the 14th Century, the Ben Youssef Madrasa was one of the most spectacular examples of architecture I think I’ve ever seen.

A new trade event called PURE Life Experiences was my reason for going to Marrakech.  The focus was luxury experiential travel – an intriguing topic to focus on for a week and an event which lent an interesting mix of people.

One of the fun parts about trade shows is that after a full day of meetings (this show had 14 appointments scheduled per day), there are usually parties in the evening which further promote networking.  Since this show’s focus was on experiences, the parties in the event were nothing short of extravagant. 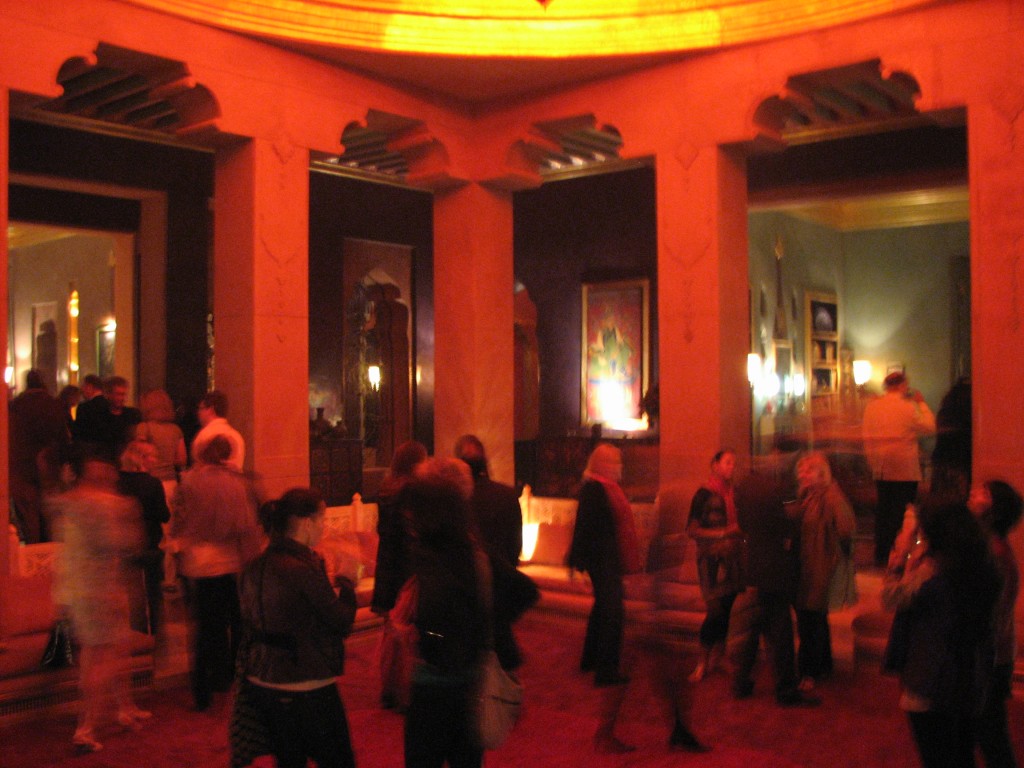 The picture I’ve shared here is from the closing party, held at the private palace of the owner of the Mandarin Oriental.  The hotel is not even finished yet, but has great promise for splendor beyond belief.  The room in the photo was actually that red.  The lighting in Morocco, it seems, is always a bit dark and exotic.

Overall, the trade show was a great success.  I met some really fascinating people.  I think my favorite was a gentleman who represents 8 family trusts (all 8 are related) which benefits about 108 people.  His job is to plan their vacations and expeditions throughout the year.  I seriously could handle THAT job!  Wow!

I’ve posted a few more entries about Morocco.  Read on!