When I was a little girl, and old enough to walk home from school by myself or with my neighbor (remember those days?), I made sure to pass this one, white house. On the porch would sit an older woman and it seemed she always had kittens in a box.  Of course, my memory may be recalling just one day, but I feel like I passed by her house often and on purpose to see those kittens.

I would often ask my dad if I could bring one home, and the answer would inevitably be, “No.”  We brought home our Golden Retriever, Farrah the Christmas I was in third grade, and while I loved her and was satisfied with a dog as a pet, the idea of a kitten/cat was always appealing.  What little girl doesn’t find kittens adorably cute?

There was one time a stray kitten showed up on our doorstep.  It was a rainy day and I decided to make a bed for the animal and give it some milk out in our outdoor/patio laundry room. My dad came home from work, and while he was reading the paper and my mother was preparing dinner in the kitchen, the kitten had come out of hiding and comfort and planted itself on the back door steps.  There was a loud “meow.”  My father folded down one corner of the paper, looked at me and asked, “Did you feed that cat?”  I confessed.  It took a few days for the cat to go away and find some other neighbor to feed it, but I was quite disappointed that I couldn’t keep it.

Our family dog was put down when I was 19 years old.  And since then, I have never had a pet in my life.  Several of my friends have dogs and/or cats, and I sort of have an auntie relationship with their pets.  The Nelson family has Tank, who I knew when he was a puppy, and who loves to play when I visit and for some reason, remembers my command for “speak.”  My friend Sarah has two cats, both of whom know me well. Ella loves me more than Taluhla, but they both know me as a frequent visitor and friend.

When I moved in with my friend Michelle at the end of August, I was happy to become a second mommy to Bailey and Belle.  They are both senior cats, but appear rather delighted to have me around.  When I arrived, it was well into kitten season.  Michelle is a volunteer for the Humane Society and from May through about November, takes in foster kittens.  Her role is to provide a comfortable home and to socialize them with humans and other animals well so that when they are adopted, they will easily adapt to their new owners and be good pets to have.  I have enjoyed being a part of this process since I moved in.  You have to admit, itty bitty kitties are pretty darn adorable!

About two and a half months ago, we got a litter of six very young and ferrel kittens.  They had been found in a parking lot and were horribly afraid of humans.  They were tiny, maybe just two weeks old (just under a pound).  They hid from us and hissed when we tried to pick them up.  Slowly but surely, they started to warm up to Michelle and I, realizing that we were the ones providing them food and comfort.  Because we already had two other kittens, the whole litter of six became too much to care for, and so we decided to keep two and give the four others to another foster family, leaving us with two older and two younger kitties to care for.  We chose “Wolverine” who we named for his coloring and crazy fur, and “Jag” named her distinguishing swirl/circular marks which distinguished her from the other three identical tabby kittens.  Wolverine was just super cute and Jag was the first to be at my feet when I opened the door to the kitty room. This was a complete turnaround from the hissing and cowering behaviors she displayed when we first got her.  Jag also was very vocal, and with her strong voice, sort of sung her way into my heart.

From the time Jag arrived until now, four of her siblings left, two kitties who were already here were adopted out, Wolverine was sent back for adoption and three orphans joined us for a few weeks so that we could socialize them and prepare them for a new life.  All the while, Jag remained petite, grew slowly and sang for her supper every night.  During TV show viewings, she was more than happy to cuddle on my lap and even grew to enjoy a kitty “sling” I fashioned so that I could hold her and still have my hands free.  In a nutshell, we bonded.

Eventually, “Jag” finally passed the two pound mark and under normal rules, would be ready for adoption.  However, this little kitty, who sings so sweet, cuddles so lovingly and looks and me as though I am her mommy, has found a way into my life that I did not expect.  The thought of giving her up and putting her up for adoption was absolutely inconceivable.  I’ve not had any problems saying farewell to the other kittens. But I could not imagine parting with her.  Sometimes, I truly believe, animals choose you.  And this little angel has chosen me as her caretaker in life.

“Jag” was officially adopted on November 19th.  I have absolutely fallen for this little sweetheart and am so glad she wiggled her way into my life and into my heart. After looking through many possible names, I decided I would call her “Aria” to acknowledge the powerful song which has become her voice.  Once I brought her home from her final visit with the Humane Society, I looked at her and said, “You know, from today, you and I are kind of official….”  And as she typically does, she looked at me, stretched her body and let out a melodic, “meeeeoooooow.”

Here she is sitting in my office chair.  Make no mistake, she runs the show. 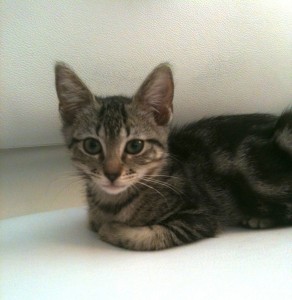