The year I began sixth grade was the year that changed my life. I transferred from Lexington Elementary to Fuerte Elementary school through what was a new math and science program. How I ever tested for this and passed, is still beyond me! I was so incredibly nervous to go to a new school. Fortunately, I knew one other 6th grader at Fuerte, Kristin Barry. She and I played softball together. She was our awesome catcher and I took her throw-downs at second base. It was a relief to know that there would be one friendly face in the sea of unfamiliar ones at my new school.

Kristin took it upon herself to introduce me to all of her friends. I was thankful to meet such a nice group of kids. They seemed to like me, and were friendly and accepting. Even so, you can imagine how surprised I was when one of the cutest and most popular boys asked me to “go” with him during the first week of school. I told Jeff Lapinski that I thought he was cute and very nice, but to please “ask me again in a month” so I could get to know him better. Jeff waited a month and when he asked me the second time, my answer was a delighted “Yes.”

My habit of journal writing began early in sixth grade, sparked by the loss of my parakeet, Tweetie, in the second week of school. I think my parents must have felt that I needed an outlet for my sadness for the loss of my pet and perhaps my insecurities in my new environment. My mention of Jeff is one of the very first entries in my journal:

I am in love with a handsome charming young man named Jeff. He’s a swell guy. I have plans to marry him when I get older. I think he has the same plans too. Hope it works out for me. I think it will. 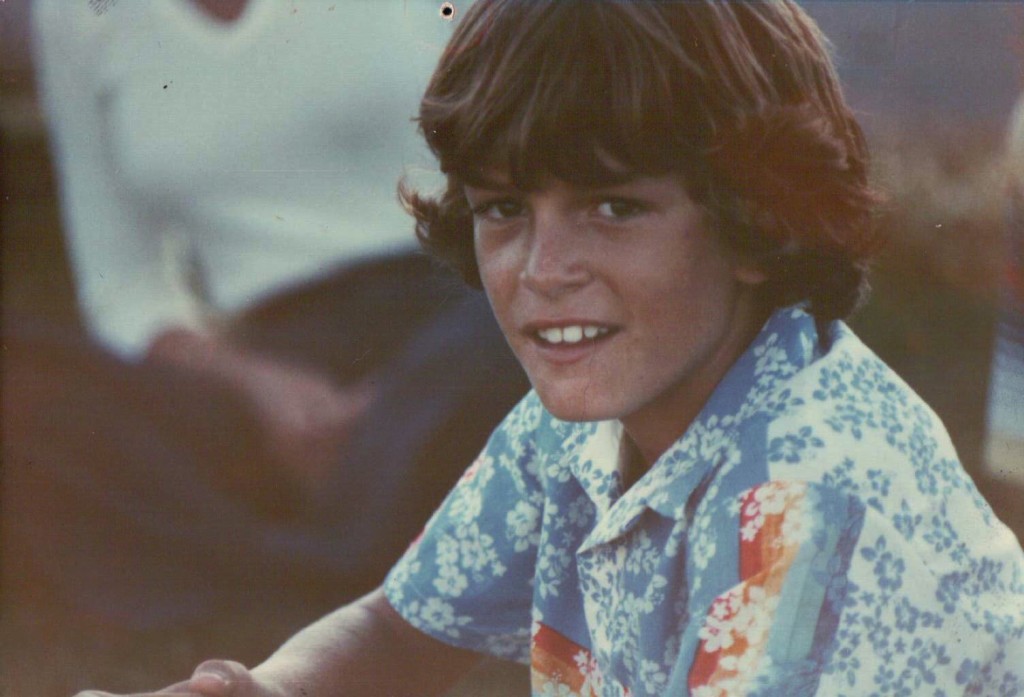 Jeff’s plans for our relationship were not quite as dramatic and long term. So that I could look at him when we weren’t at school, he gave me this photo. His sweet message was a bit more realistic for a sixth grade romance:

I hope you like this picture as much as I like you. I hope we stay together for this whole year and maybe another.

We didn’t last that whole year, in fact. My journal tells me that we broke up in January of 1982 and that I was crushed. My suspicions were that he liked another girl. Jeff broke his leg in February that year. I wrote in my journal that I wanted to sign his cast and tell him that I still loved him and that I wanted to be boyfriend and girlfriend again. I don’t think I went through with that plan. I can’t for the life of me remember what I wrote on Jeff’s cast and am surprised I didn’t document what I actually wrote. Just a month later, David Kilpatrick showed up at Fuerte Elementary school and helped me get “totally over” Jeff. Is it surprising that I thought that David’s and my love would last forever? “David + Shanna = TLA.” I was always a hopeless romantic!

While we can look back on these days and giggle a bit about puppy love, I reflect on that time with a special gratitude for Jeff. Yes, Kristin played a big part in my being accepted into my group of friends, but Jeff’s request to go steady gave me an even bigger stamp of approval.  I can’t imagine what my life would have turned out to be like had I not mingled with that group of friends, had I not caught the eye of Jeff Lapinski. The amazing group of people I grew up with was solidified in the sixth grade with the help of Kristin, with the title of Jeff’s girlfriend. 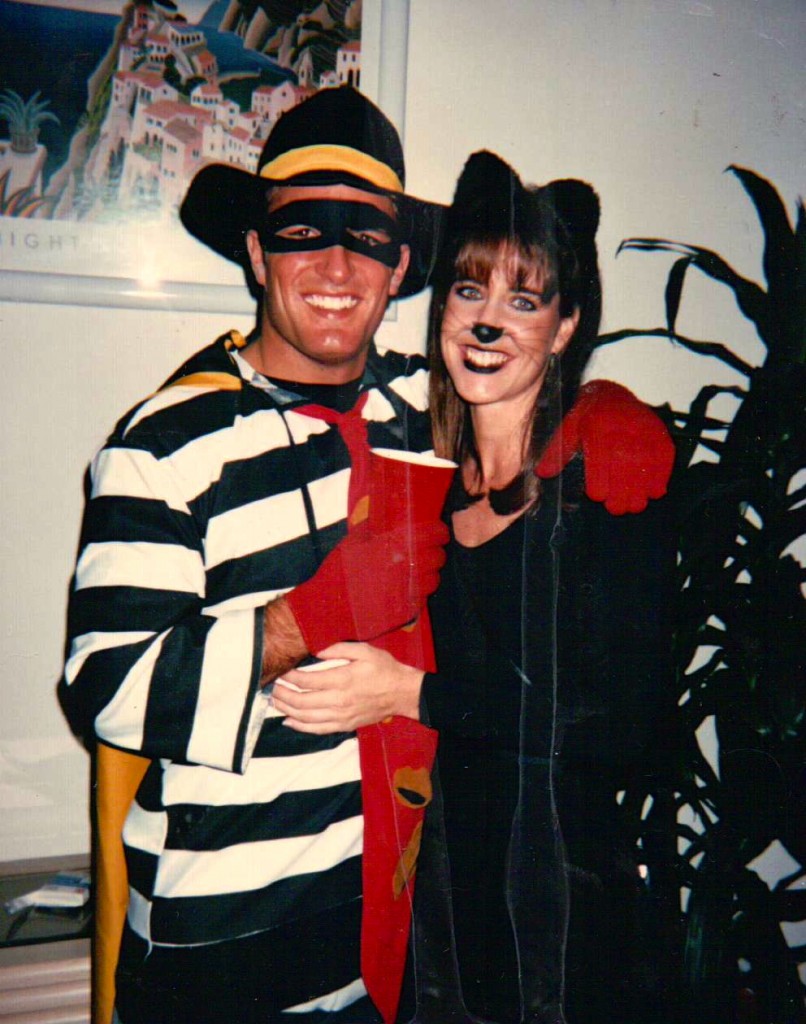 I have no idea what year this photo was taken. Given my hair style, I would have to say it was in my mid 20’s. I don’t even remember whose Halloween party this was, but I remember going to the party with Randy Close and Jeff Watts. I was delighted to see Tracie Klein there as well and a host of other friends from Valhalla. And our sweet Jeff. Handsome as ever, fun as always, and such an unexpected treat. He was a very bright light.

Jeff Lapinski impacted all of us, I believe, in similarly significant ways. We can remember only kindness and friendship, smiles, laughter and good times. He was every girl’s dream and every guy’s buddy. He personified good looks, intelligence, athleticism, great hair, a warm smile, and a sincere heart. And those legs! He had the most amazing legs! Half the girls in the school would watch boys soccer, not for the game, but to see Jeff’s legs in action! He was everything good and spectacular. He was that guy. The babe, the stud, the dude, the guy. He was, in my eyes, Superman. He is probably one of the only people that everyone from high school remembers, and remembers fondly.

At our twenty year reunion, it was odd to see Tommy Nielsen at the party without Jeff. He was one of the people I was really looking forward to seeing. I truly missed him being there.  Little did we know, Jeff’s fight was just beginning. I was crushed when I heard the news. It wasn’t that Jeff and I had remained so tight through the years. It wasn’t even the regret that we hadn’t. It was this weird feeling like, “That’s not possible. Superman does NOT get cancer.”  There was no wish that this happened to someone else. There was only the thought that Jeff simply did not deserve this challenge. It was the “of all people” sentiment. It forced me to examine my own mortality, “What the hell chance do the rest of us have if Jeff Lapinski gets cancer?”

As only Jeff could, though, he continued to make an impact on our lives with those amazing letters, full of positivity and high energy. Full of fight. Perhaps even a dash of Trojan spirit. I loved reading his letters and phrases like, “…getting on with life as normal.” I treasure the correspondence we shared during his battle. Full of love and appreciation, and even surprise that friends from childhood would lend their support. A humble man. I can only hope that he truly felt all of our love wrapped around him.  With all of the horrible procedures he had to endure, he never complained, never worried, never made it seem like that big of a deal. Even in his last update to us all he said:

There it is.  I’m not gonna lie, life has been easier than it is right now. BUT, I will get though this…..just have to grind a bit harder.

Just have to grind a bit harder. I think about this when I am faced with a task I don’t really enjoy. What do I have to complain about?

While I am not aware of every detail of this last month, I do know that Jeff fought very hard. He reminded us precisely how precious time is. We take for granted one day, one week, one month. But Jeff was fighting for exactly that. He wanted to live, wanted to be present. One more day, just to grind a bit harder. Even in Jeff’s final days, he made a significant impact on all of us. He showed us strength, leadership, will, guts, attitude, spirit, gratitude, grit, friendship, love and faith.  In his death, he showed us how to live.

It’s still hard to believe that he is not physically with us. My heart is so heavy, as is yours, I’m sure. My heart hurts for his dear mother and father, for Scott and Lynn. And my heart breaks for his best friend, Tommy, who could not have been a more sturdy rock for Jeff. While I am so very, very sad that we have lost a most amazing man, I do believe that he will truly live on in all of us. We each have our own stories about that guy. He touched our lives. He left his footprint on our hearts.

Sometimes, when one person is missing, the whole world seems depopulated.  ~Lamartine

To love. To be loved. To never forget your own insignificance. To never get used to the unspeakable violence and the vulgar disparity of life around you. To seek joy in the saddest places. To pursue beauty to its lair. To never simplify what is complicated or complicate what is simple. To respect strength, never power. Above all, to watch. To try and understand. To never look away. And never, never, to forget. ~Arundhati Roy

Jeff is love, he is larger than life and the most honorable of men. He is Superman. And I will forever miss, remember and love him.