The intention was to go out to Halong Bay for a site inspection for a program we want to add on our tour.  The result was me strapped up in climbing gear, reaching the end of the rope with a big smile on my face.

Onslo greeted me at the pier and after hopping on the second boat, we veered in a direction where most boats don’t go.  The smaller boat allowed us to get much closer to the cliffs which jet out of the water in the most extraordinary formations.  Arms length away, I could easily see why this would be a climber’s playground of paradise.

After navigating through the floating village, we reached the beautiful cove where the team was set up and enthusiasts were getting intimately familiar with the limestone’s nooks and crannies, navigating higher for a spectacular view.  A few minutes later, I was strapped up and Onslo was giving me a basic lesson and teaching me the commands, reminding me to relax and breathe.

When I was a little girl, our home had a nice big tree in the front yard which I just loved to climb. The one in the back was fun too, but the higher branches weren’t so sturdy and I just never gained the affection for that tree as I did for the one in the front yard.  There was this one branch in particular which forked at one point, creating a perfect chair for me and the perfect arm rest.  I’d get all cozy in that nook and hang out there for hours, me and the tree.

I tried to be that little girl for a few moments while climbing this massive rock, the girl who had no cares or worries, no reason to climb up, just the wherewithal that I could and it was fun to do so.  And with that enthusiasm, I climbed the first bit of the cliff pretty easily, although enjoyed the reassurance from Onslo, who’s calm and encouraging voice served as super motivation to keep moving.

Then I got stuck.  There was a bit of a round boulder which had just enough of a curve outward that I couldn’t see my feet.  And so I couldn’t figure out which foot to step up with, nor where to put it.  Onslo could see that I was “in a moment” and reminded me to breathe, that I was safe and even if I totally let go, I wouldn’t fall and that I just needed to turn my body to the right and step up, that I had to trust that my right foot would find something to push off of.  A few minutes past and I finally sucked up enough courage to do so.  My muscles at that point were a bit shaky, as well as my nerves, as I had gone way past my comfort zone in physicality and in height.

I’m stubborn, though, and I was not about to quit.  And so I silenced the “What are you doing?” voice in my head and finished the route, reaching the top of the rope and taking Onslo’s advice to admire the view. Woo hoo!

The rest of the inspection included a tour of the island, some nature walking, and another view of adventurous people climbing up really big rocks.  Separate from the work stuff, I was glad to get in touch with the little girl in me to never had fears, who never questioned why, who just skipped out the front door, and randomly, for no reason at all, jumped up in her favorite tree, swung over branches and pushed her way higher to hang out in “her” spot.  My muscles may hate me today for the torture they received on that rock, but I’m so delighted with my experience, I just can’t stop smiling.  It was a GREAT day!

Part of the adventure is the journey through Halong Bay. Here’s a shot of two men who live in one of the numerous floating villages. Fascinating to think of that lifestyle! 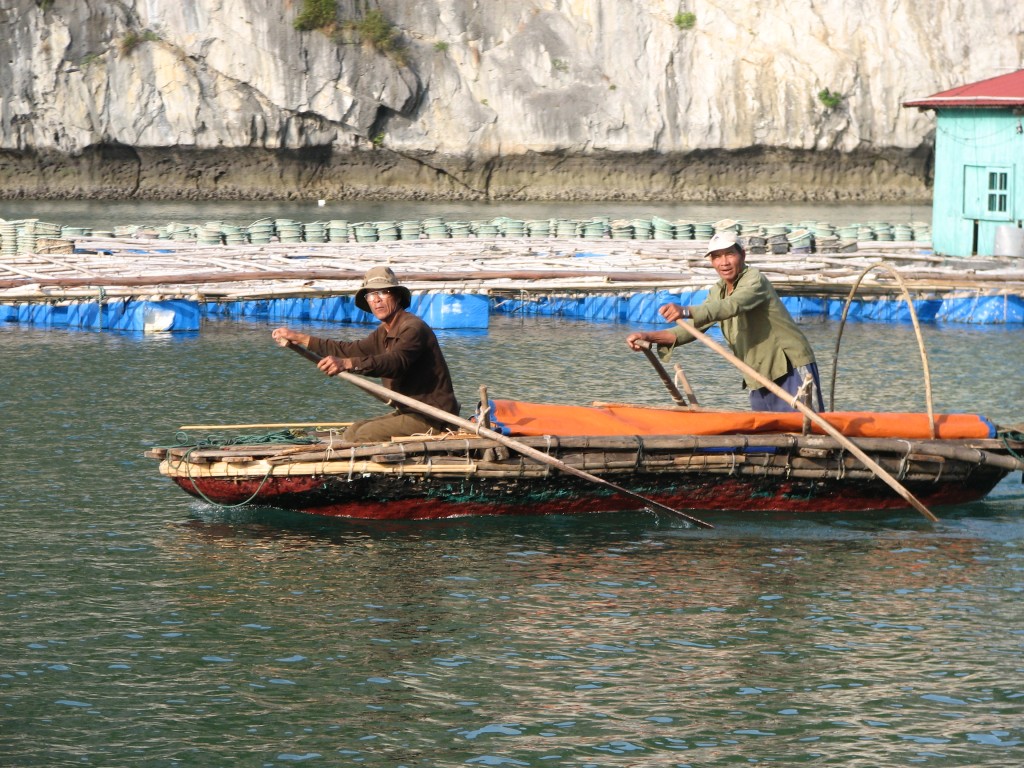 « Looking ahead
A time for giving »