Today, as I opened my iWeb to update my site, I noticed a few comments had been posted.  I easily found the recent posts, but there was one which wasn’t obvious.  So I scrolled and scrolled until I found this comment was made yesterday on my entry which was posted nearly two years ago:

Shut the fuck up you communist. If you knew anything about anything you would know that competitive eating is huge in many other countries and relatively small in America. And I guess passing out a few Krystal burgers around the world is going to magically end world hunger. These guys train hard to do this and if they want to do it, then let em.  They aren’t hurting anyone.  Find something more reasonable to bitch about you miserable commie.

So, to be a good sport, I posted this:

If you are one of my friends being sarcastic – ha ha, very funny.

If you are a random visitor who has spent enough time on my site to read all the way back to 2008 – Thanks for the visit!  I appreciate your interest and thank you for your participation in the comment feature!  Way to utilize it to the fullest!

I should also clarify that I am not a communist.  I happen to live in a communist country at the moment, but that does not mean that I enjoy it.  As the author and owner of this website I have every right to delete your comment.  If I were communist, then I would have.

Thank you for visiting On The Bright Side, and have a great day!

I’ve been spending some time recently researching social media outlets and interconnectivity on the internet.  It fascinates me. And ever since I’ve been more active on Twitter, I’ve noticed a sharp increase in traffic to my website.  And that’s great.  That’s what I’ve hoped for.  I like that we have methods of communication which allow us to express our opinion and share information, our ideas and opinions with others.

I can’t help but wonder who are the (at the time of this post) 14 Swiss, 6 Australians, 2 Italians and 1 Malaysian who have visited my site?  I pretty much can guess who all the others are, but I’m curious to know who else has visited On The Bright Side.  It’s exciting and I eagerly watch the flag counters now that I’ve added them.

But receiving a visit and a comment from some idiot who thinks I’m a miserable commie because I don’t like sponsored eating contests and who uses the lame-ass excuse of “they’re not hurting anyone” can simply find another website to peruse and blogger to harass.  Hey Pissed – Thanks for giving me something more reasonable to bitch about. Go ahead.  Add a comment.

Professional Eating Contests – Two years after my original post, I still think these contests are a disgrace and a waste of money.  This photo sums it up for me.  Gross and totally disgusting!

NOTE:  Since I redesigned my site, the comments have been lost.  But trust me, I couldn’t make that stuff up. Nor would I want to!

Forget financial bailouts for a moment.  This is what’s REALLY wrong with America – Competitive Eating.

I just read the news today that Joey “Jaws” Chestnut shoved 93 burgers in his face to repeat the title “World Hamburger Eating Champion”.  Can I get a – Whoopdeedooo!!!!?????

This idiot won $20,000 for over-eating.  And scores of people attended the event to cheer on these freaks who compete every year.  Here is the entire article from the Krystal Square Off official website.

Billed as the highly anticipated rematch between Chestnut, the No.1-ranked eater in the world, and Japan’s speed-eating legend Takeru Kobayashi, the contest quickly became a one-man show as Chestnut jumped out to an early lead and never looked back as a crowd of 10,000 cheered him on in downtown Chattanooga.

Kobayashi, a three-time Krystal Square Off winner who missed last year’s championship due to a jaw injury, finished in a disappointing third place, eating just 84 Krystals, 13 less than he ate when he won Krystal Square Off III in 2006. Twenty-three-year-old rising star Patrick “Deep Dish” Bertoletti was the second-place spoiler, out-eating Kobayashi by just one Krystal.

“Chestnut’s win today at Krystal Square Off V proves once again that he is competitive eating’s new superstar and the undisputed number one ranked eater in the world,” said Brad Wahl, vice president of marketing, The Krystal Company.

Chestnut pockets $20,000 for his win, along with the coveted Krystal Square Off Champion’s Belt and Trophy made out of crystal. Bertoletti earns $10,00 for his second place finish while Kobayashi takes away $5,000. The remaining top eleven finalists receive payouts ranging from $3,000 to $500. The $50,000 total cash purse is the largest in competitive eating history.

Presented by The Krystal Company and featuring the iconic fresh, hot, small, square Krystal hamburger, the Krystal Square Off is one of the two majors in the sport of competitive eating and the only world hamburger eating championship sanctioned by Major League Eating, the governing body of all stomach-centric sports.

“There are precious few moments in professional sports when you can watch as a competitor affirms his place in the history books. With this win today, Joey Chestnut just said to the world: I am Krystal King hear me growl,” said Richard Shea, president of Major League Eating. “In today’s economy anybody can be negatively impacted by unforeseen circumstances. Kobayashi is feeling that impact, but if I know him he’ll be back.”

Today’s victory was Chestnut’s first win over Kobayashi in a Krystal-eating contest, and further cements his dominance over the 30-year-old Japanese eating star. Kobayashi is responsible for first bringing the sport of competitive eating into the American mainstream more than seven years ago, only to see his star fall lately after several high-profile losses.

The official results are as follows:

OMG!  I don’t even know where to start.  How about those nicknames?  Or my favorite quote from the article, “In today’s economy anybody can be negatively impacted by unforeseen circumstances. Kobayashi is feeling that impact, but if I know him he’ll be back.”  What the hell does that even mean?

For crying out loud…how much money does all this nonsense cost each year?  How many people could all those mini-burgers and the $50,000 cash purse (the largest in competitive eating history!) feed???

There are so, so, so many things wrong with this, my head hurts.  If you want to learn more about this disgrace to humanity, you can go to the official website at www.krystalsquareoff.com.  You can even join the Fantasy Eating League! Sign me up! 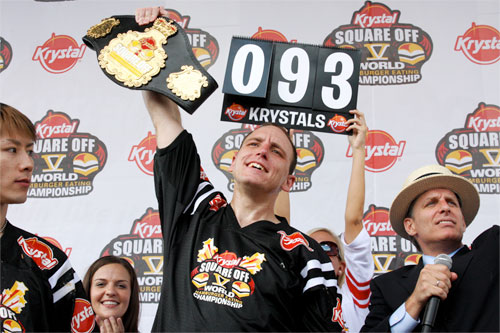 Are these people for real? – Joey “Jaws” Chestnut, the “undisputed number one ranked eater in the world” holds up his “coveted Krystal Square Off Champion’s Belt and Trophy made out of crystal.”  Cool!  Eer…not!