This is such an unusual occasion, I had to make a special post!  Look at me!  I’m wearing a dress! This was at our Emeraude’s Wine & Dine Cruise Classic. Doesn’t the dress have a nautical feel to it? Kind of like flying the cocktail flags!

Actually, I am in love with these dresses by Chula and I do believe that I will be buying more.  They are just beautiful and me being the tomboy that I am, felt so girly wearing one!  It was fun! 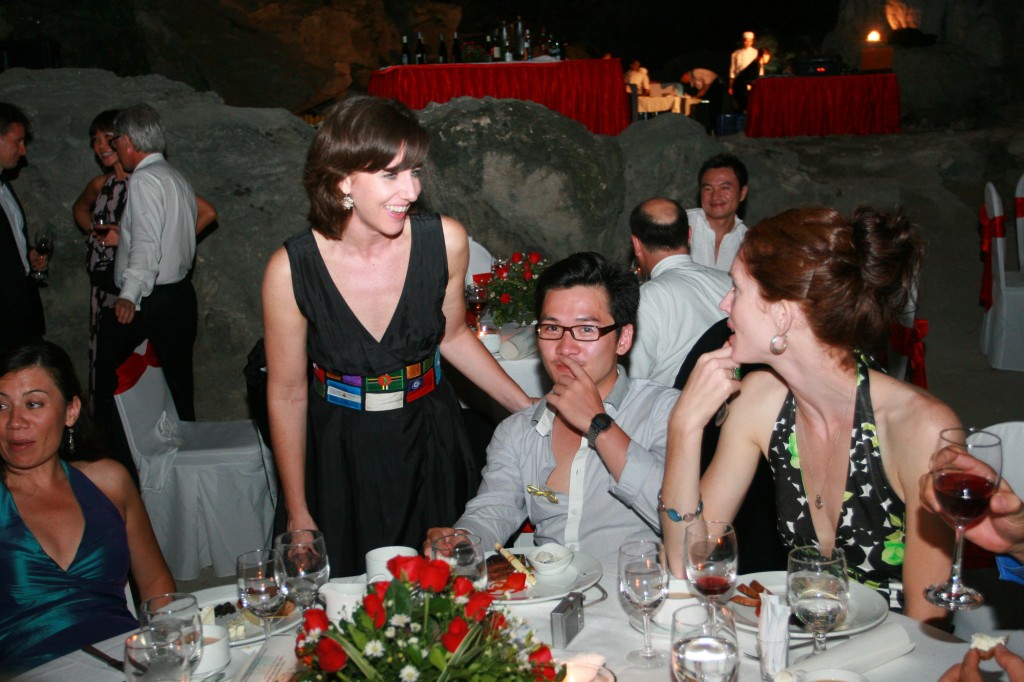 Another day at the office.

Emeraude’s 5th Annual Wine & Dine Cruise Classic was a big hit this past weekend!  I remember being in Hanoi last year at this time, staying with Kurt and Anna and hearing about this wine cruise where there is a black tie dinner, a winemaker, and such.  So having sat in meetings for the past six months to help plan the event, I was more than excited!

One thing I was excited for too was the chance to wear my formal gown.  I bought two from this great designer, Chula, and took both with me.  I choose the one which was more suited for a cruise.  Although i may wear the other one next year.  In any case, I’m armed with a formal gown in the event I get asked out to a formal event!

The whole weekend was a smashing success.  We started with breakfast at the Press Club, rode luxury buses out to Halong Bay and then began the cruise.  The afternoon was spent at the beach and the weekend’s big moment was dinner by candle light in Drum Cave.  You can check out some photos HERE.  The dramatic setting of the cave made for a spectacular evening.  It would take a strange person not to enjoy that kind of event.  So unique and beautiful!

I don’t know yet how we will top this next year – we have our work cut out for us!  The great news is, we’ve already got half the cabins reserved!

A few other photos from the event: 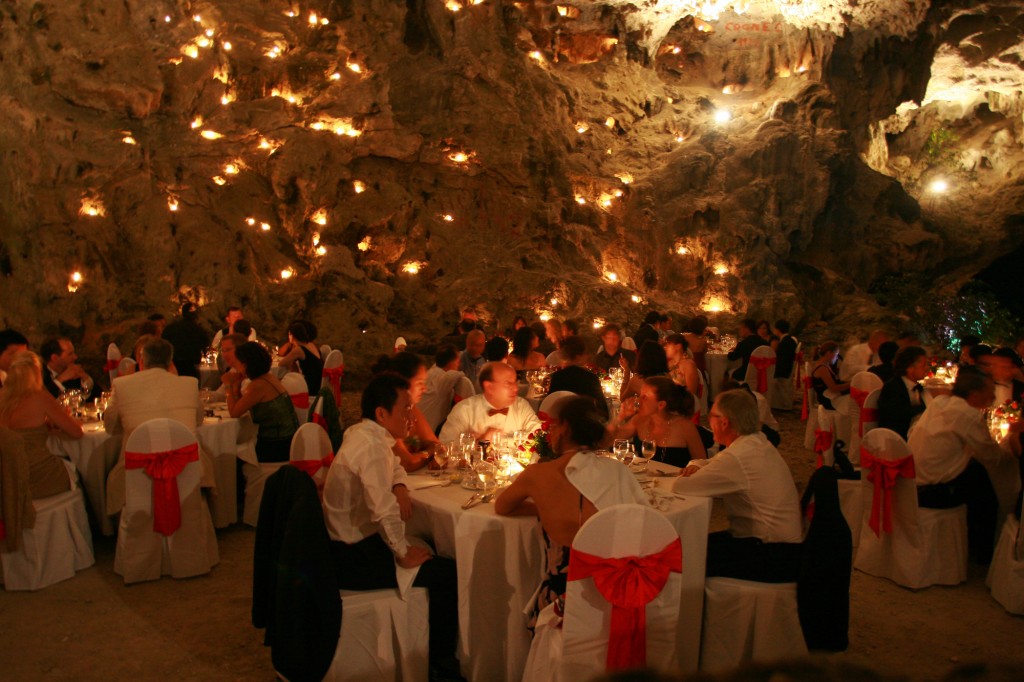 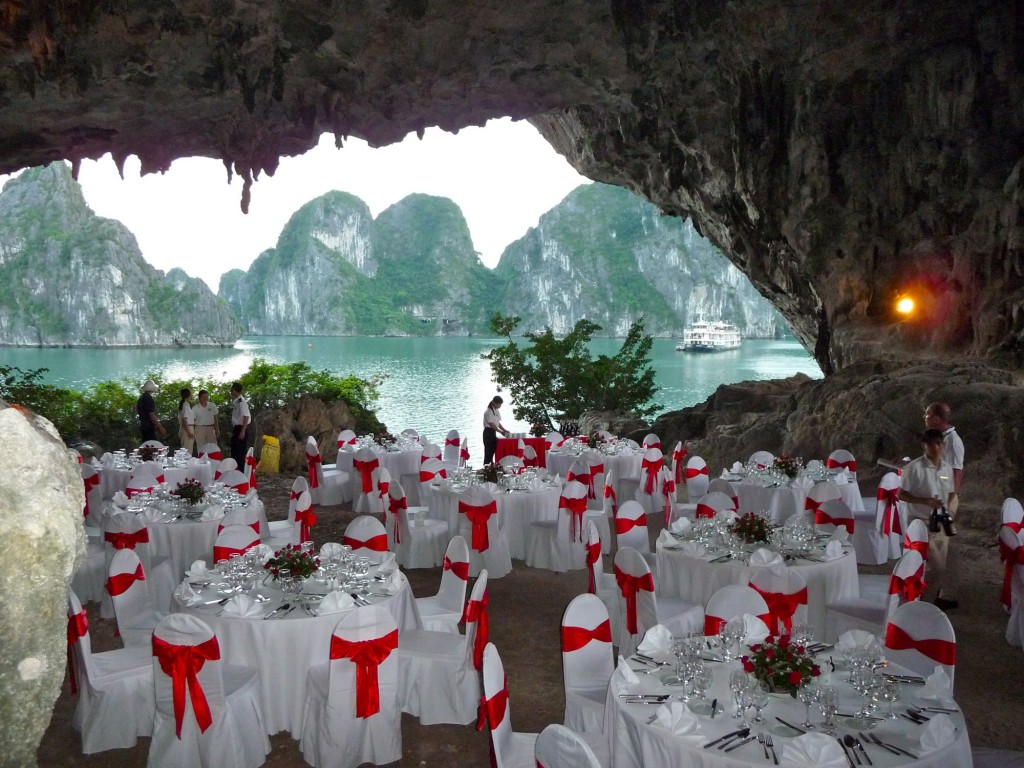 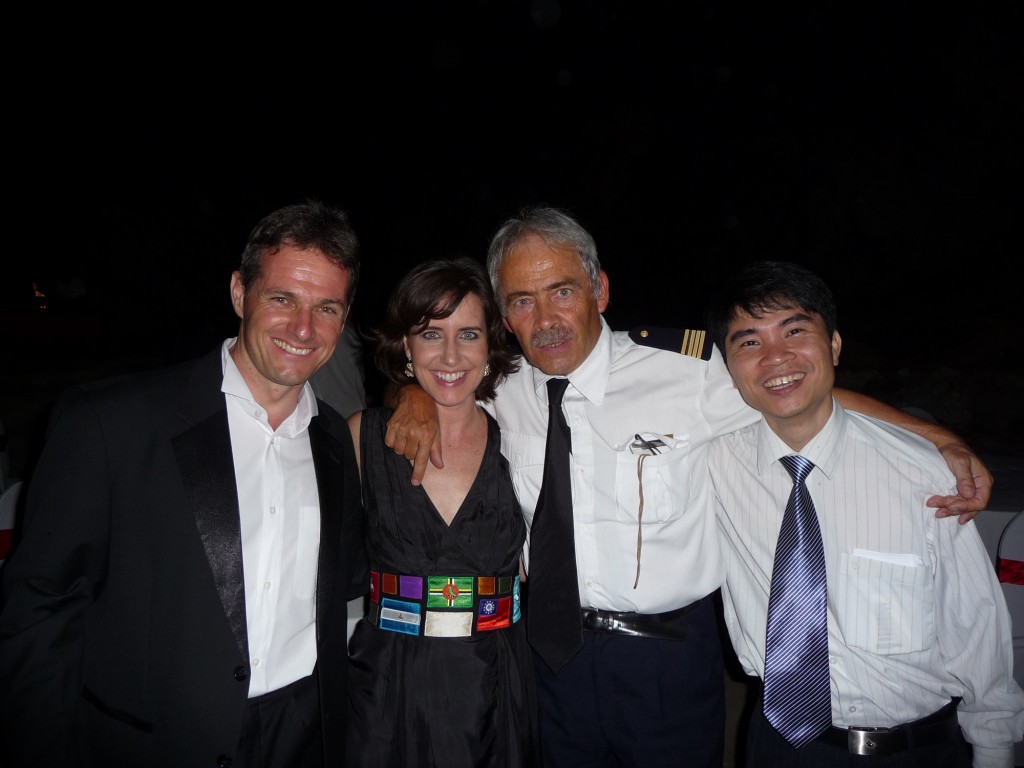 A VIP on Board

One of the perks in working in the hospitality industry is that you get the occasional VIP visitor. That was the case when the McCain delegation decided to book a cruise on board our boat, the Emeraude.  We were delighted to have the group sail with us.  Everything went super smoothly, thank goodness. Everyone in the group commented that it was the highlight of their trip.

McCain, who was the Republican nominee for president in the 2008 election and who spent more than five years as a prisoner of war in Hanoi from 1967 to 1973, was accompanied by an American delegation that included Senators Lindsey Graham (R – S.C.) and Amy Klobuchar (D – Minn.).

During the overnight cruise, McCain fielded questions from fellow passengers. He and his entourage visited Surprise Cave. Like everyone else, he stood on the deck and marveled at the karsts. Several members of his delegation attended a screening of the French epic, Indochine on the Emeraude’s sun-deck after dark.

“They insisted on no special treatment,” said Kurt Walter, general manager of Emeraude Classic Cruises. “That was the really remarkable thing about this entourage, and they were very clear about it – no red carpet, no special menu. They only wanted to experience Halong Bay the way all of our passengers were experiencing it.”

When it came to dining, the 2008 presidential candidate waited on line at the buffet and served himself.

None of the Emeraude’s passengers had been given advance warning about the McCain trip.

“It was a big surprise when he walked into the restaurant,” said Walter. “You could see everybody’s eyes grow larger.”

McCain fielded questions from fellow passengers, four of whom were American. He spent the night on the upper deck of the vessel in the Paul Roque Suite.

“He didn’t ask for the suite, but we insisted,” said Walter.

McCain told Walter that the cruise on the Emeraude was his first overnight cruise on a pleasure craft. They talked about hotels in Hanoi, and Walter told the senator about a fine, new hotel on West Lake.

Since its maiden voyage in late 2004, the Emeraude has set the standard for upscale passage on Halong Bay. Modeled on a paddle steamer of the same name that cruised Halong Bay from 1906-1937, the Emeraude accommodates 74 passengers in 12 superior cabins, 24 deluxe cabins and three suites. The vessel evokes the romance of the nautical age with classic architecture, polished wooden floors, beadboard wainscoting and brass fixtures. The Restaurant specializes in western fare and freshly caught seafood. Each cabin features outdoor seating, as does the commodious sun-deck up top where the crew screens a movie nightly.

Emeraude Classic Cruises is owned and operated by The Apple Tree Group, a French-owned, Ho Chi Minh City-based company with interests in tourism and hospitality, real estate and construction and import and distribution all over Southeast Asia. Its hospitality properties also include La Residence Hotel & Spa in Hue and the Press Club in Hanoi, as well as the Kamu Lodge on the Mekong River near Luang Prabang and the Villa Maly, a boutique hotel in Luang Prabang.