Soon after I returned from Japan in 2007, 13 of my Japanese friend came to visit California on what we called the Tomodachi Tour. Tomodachi means friend, and so the term fit perfectly.  For my first party in Japan, I reunited with the friends who joined me on this tour.

We met up at a kushiyaki restaurant.  I call this “stick food,” because everything, whether it is fried, grilled or fresh, is served on a stick.  We had a party at this restaurant before…it’s actually one of my favorites.  As always, the beer was fresh and the food delicious.

The members of the Tomodachi Tour were not only eager to see me, but they were happy to have an excuse to get together themselves and catch up.  Most everyone brought their photo albums.  We all enjoyed reliving the trip, the funny moments, the favorite places and special events.  Hands-down, the favorite part of the trip was the BBQ at my parents house.  I’m so delighted I could give them that opportunity.  I remember how tiny little Noriko and Tomomi ate everything…the hamburgers, the hot dogs, the chicken, the salads…they had to have a taste of it all.  And Yomamura listed this as his #1 memory in his album.

Their favorite city was also San Diego.  We visited San Diego, Los Angeles, and with half the group, Las Vegas.  Yomamura, with the most wonderfully designed photo album, kept a bottle of sand he took from Coronado.  A prized possession.

As we chatted through the evening and caught up with one another, I fell back into a rhythm which suits me so well.  I was surprised how easily my Japanese returned to me. How even though I was the only foreigner in the group, I was one of them.  That’s how I always felt with my Japanese friends.  I never felt different.  I always felt I belonged.

As the beer went down and the happy times relived, we began talking about a second tour.  We decided we would once again visit San Diego, but then also San Francisco and Seattle.  We could call it the cities which start with S tour, but instead, we landed on TOMO II.  And Tomomi, who has decided she wants to get married at my parents house, particularly like the name, because if the tour becomes her wedding TOMO covers her name and II (2) represents her and her future husband.  So there we have it.  TOMO II is in the works! 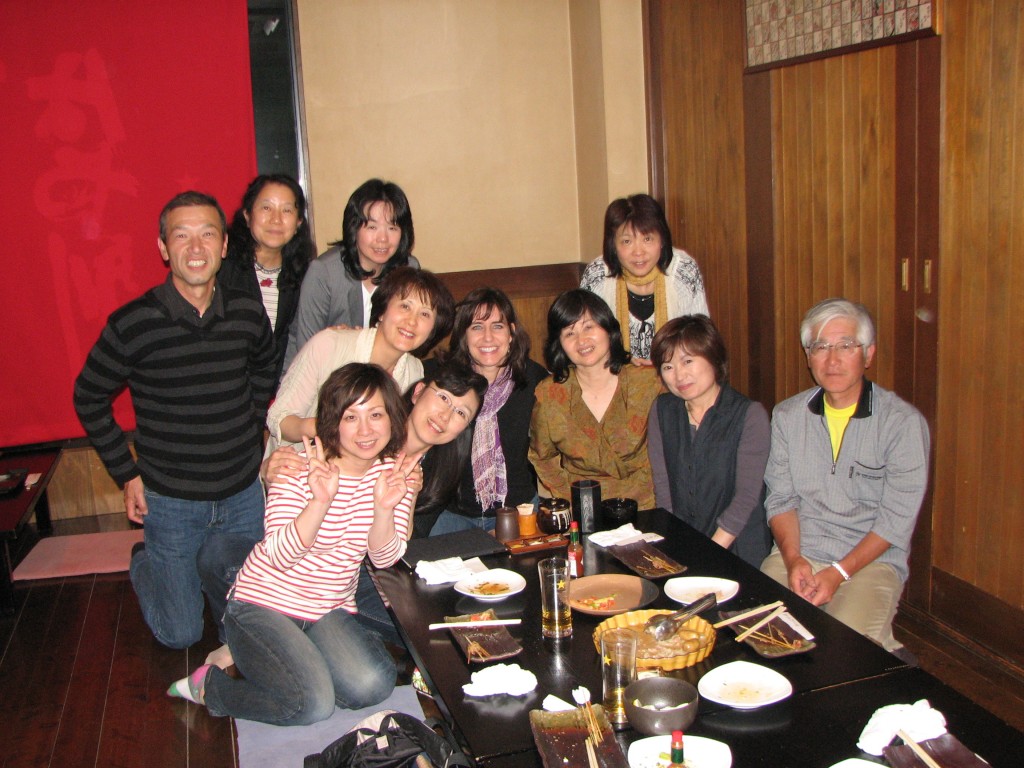 The photo above was taken at the end of the evening.  I loved seeing this group of friends and having this be the kick off enkai for my stay!  TOMODACHI are good!!! 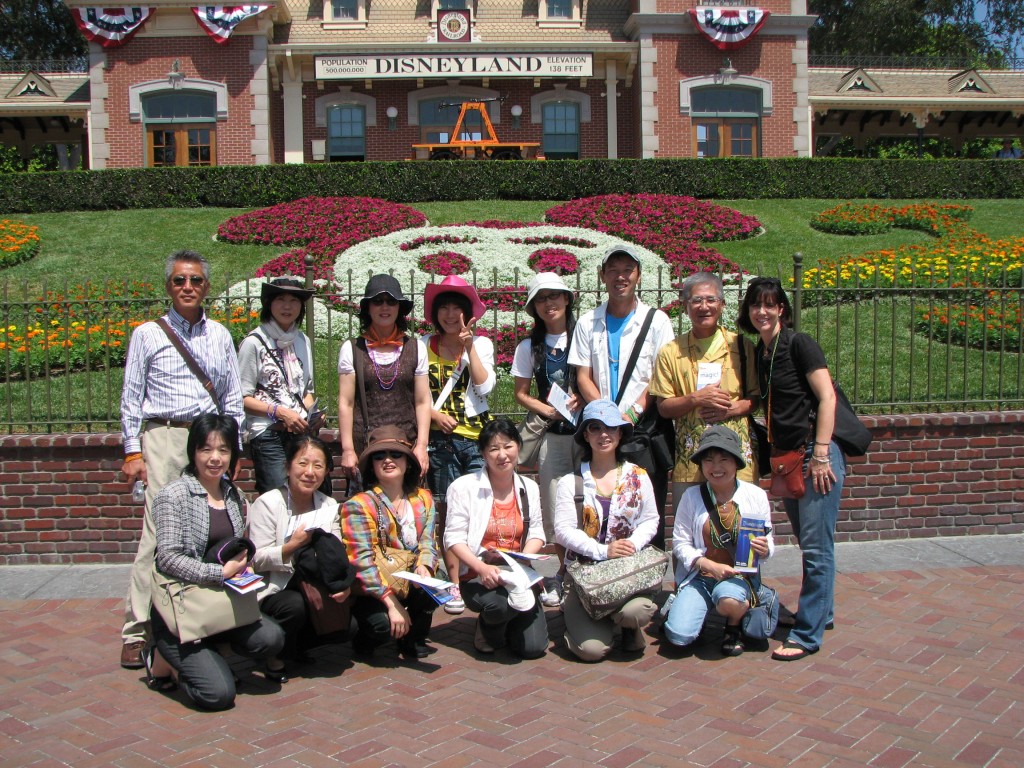 This photo was taken during the Tomodachi tour in 2007. Disneyland was a must!!!

I’ve just returned from a most fantastic two weeks in Japan.  I jotted down lots of notes and journal entries, and will be sure to post my stories and photos soon.  I needed to finish the re-design of my website first and then I’ll spend some time this week to update the blog.

To all my amazing J-friends – THANK YOU!!!

You are the reason Japan is such a special place for me, my 2nd home, and why it was so terrific to be back, even if for two short weeks.  I love you, I miss you and you remain in my heart.

Stories and photos to come soon! Here’s a teaser: 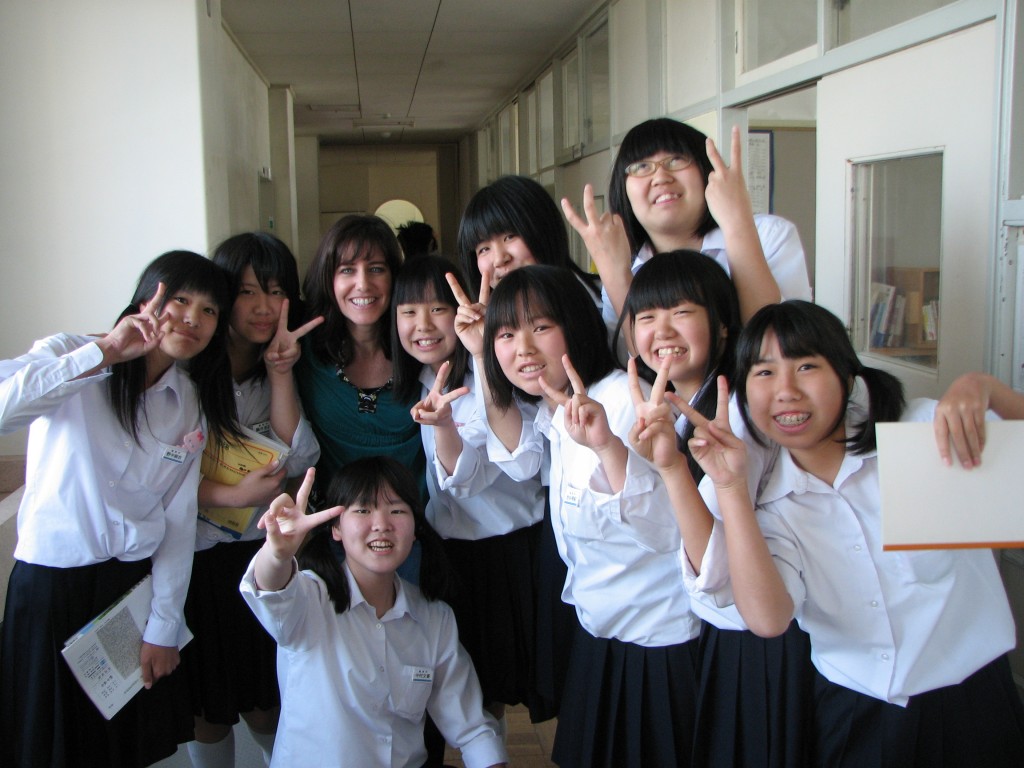 My beautiful girls! – No doubt, one of the highlights of my vacation in Japan was the visit to the junior high school so I could meet with all the kids I used to teach.  A great day!

Just a notice to all my J-friends.  I AM COMING TO JAPAN!!!!

It’s been nearly three years since I left Japan and my schedule has worked out to allow me to visit in May.  I am so excited, I can hardly stand myself!  Will two weeks be enough? Will I want to stay forever?

Sometimes people ask me what my life is like in Hanoi.  What do I do in my free time, who do I hang out with, etc.

It was Matias’ birthday and so he had a little party at his place.  The weather was perfect for an evening on a balcony overlooking Truc Bach Lake.  It was the type of party any of us might have in our own hometowns, just minus the large crowds of friends we don’t have the luxury of seeing while living abroad.

We camped out at the table on the balcony, drank some beers, munched on potato chips, told stories.  The main difference was that we have an international group of friends, and so we sang Matias birthday songs in other languages.  That’s the fun part of living abroad.  You don’t just learn about the culture you are living in, but also about the other expats who are right there with you….missing home, managing day-to-day, learning lots and having birthdays.

If last week was my social media Sunday, today was silly Sunday!!!

You all know or have met via this blog my dear friend Pete.  Well after not seeing each other for a few months (our schedules are a bit nutty and he lives up in Sapa), we were able to squeeze in some quality Pete & Shanna time this week.

We enjoyed a leisurely lunch at the Metropole on Wednesday with Pete’s new iPad in hand and a few games of Angry Birds. (HilARious!!!)  Quite a scene, the two of us giggling over an electronic device in the middle of a posh restaurant!  Today, we met up for brunch at Joma.

Joma is this great coffee place which has its roots in Laos.  They serve excellent coffee, fresh-baked breads and bagels and homemade pastries and such.  Whenever I visit Luang Prabang, I usually make a stop at Joma.  It’s simply delicious.  I knew Joma had moved into Hanoi, but I didn’t know that they opened two cafes, one being just down the street! Woo hoo!

There’s no telling what will happen when Pete and I get together.  You can count on the fact that we will laugh our asses off and chat up a storm.  One fun thing Pete and I have in common is that we have both lived in Japan.  So we can use some of the fun Japanese phrases and keep the language alive in both our heads.

Pete is one of those friends whom with I have no reservations. I am 100% Shanna Banana when I’m with him and it’s nice to laugh and be silly and feel the freedom to talk about anything and everything.  I’ve just come home and while I’m sleepy from a late night and an early/noisy morning, my visit with Pete always puts a pep in my step and a smile on my face.  I’m happy and super content with the world!  Thanks Pete!  Love you buddy!!!

On many occasions, I have applauded Facebook for reconnecting me with scores of high school friends.  I love love love FB for this.  The late 80’s at Valhalla was a special time, and we were a great group of kids.  Turns out, we are pretty spectacular adults, too.

Here’s another reason why FB is awesome.  On my way to the ITB trade show, I posted a note in my status saying I was on my way to Berlin.  Class of ’87 Mark Anderson happened to land in Berlin on the same day, noticed my status and asked if I had free time for dinner.  I did.  And we met.  20+ years since we’d seen each other, we caught up over plates of Wiener Schnitzel at Berlin’s famous Borchardt Restaurant.  We finished with drinks at another popular watering hole, Newton’s.

Good friends can be determined by how few beats are skipped in a conversation.  If you feel like you just spoke yesterday, you’ve got a good friend.  If it feels more like you are trying to get better acquainted with the newbie at the office and are struggling for conversation, then chances are you were not that good of friends in the first place.  Mark and I didn’t skip a beat.  His humor is still dry and witty and his company is still easily enjoyed.  It was a good throw-back to high school and I enjoyed the visit tremendously.  It was great to see you Mark!!!

And all because of that Facebook thingy!!!  Now if I could just get you all to get on skype – I could actually talk with some of you versus exchanging emails! ;p

Vacation is officially over – Boo!

Two weeks went by too quickly.  I didn’t do enough. I wish I could have seen more people.  Squeezed in a trip to San Francisco or even Dallas.  That would have been good.  So many things going on in my head and my heart.  I’m not sure I got enough hugs from my niece. Will she remember me when she see’s me on skype through the computer?  One more week would have been good.  I could have checked a few more things off the list.  But then again, these two weeks were not about checking lists.  It was about taking a breath and reflecting and just having a good time.  And that I did.

I return to Hanoi with a renewed spirit, a new outlook and a host of ideas for what’s ahead.  I’m really thankful for having a couple of weeks at home.  It did me a world of good.  Cheers.