A Note on Michael Jackson

It was the summer after seventh grade and Randy Close and I were a couple.  In preparation for a road trip to Magic Mountain with Danielle, Tiffany, Ginger, David and younger brothers Kevin and Chris, Randy and I listened to the Thriller cassette tape over and over again until we knew every word to every song.

As we all piled in the Close’s van, we begged to play the Thriller tape. Without hesitation, Randy and I could sing, “Ma ma se, ma ma sa, ma ma coo sa” as our friends looked on in amazement that we actually knew the words.

Our group of friends always loved to go dancing, and we tried very hard to copy those moves, the fluid movement of the legs, the kicks and that unforgettable moonwalk.  Who can forget the Grammy performance where Michael Jackson moon walked across the stage inspiring hours and hours of practice among any of us who had an ounce of desire to capture that coolness?

I remember very clearly the day that upperclassman Camille got to go to the Michael Jackson concert.  Everyone knew that she was going.  And the next day she returned from the concert without a voice, it was that ridiculously fun.  We wanted to hear every detail of the concert.  Super jealous.

High school airband competitions were popular during my high school years and I remember the junior class members doing the entire Thriller dance sequence on our theater stage.

His songs were a part of every teenage year of mine and my friends’.  His music shaped our childhood in so many ways.  Even when he came out with Bad, and returned to the pop-music scene physically altered, he still remained the “it” guy for us.

I don’t know what happened to Michael, what made him become the sheer freak of nature that he was, the Wacko Jacko that made headlines.  I don’t think any of us want to imagine what it was like to live his life under such scrutiny.  Who wouldn’t turn a bit fruity? 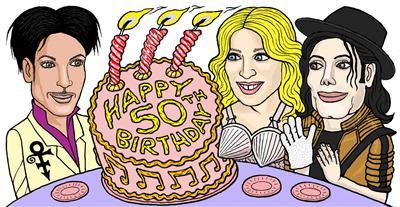