What’s in a name?

I received another e-mail today from one of the owners addressed to “Shana”.  I have politely and formally asked three times now to spell my name correctly and frankly, it’s getting on my nerves. I know my name is unique, but that extra N really isn’t so difficult. It’s not like my name is Shanikwatara, but spelled with a Q but no U only on the day of the full or new moon.  I think addressing one of your top-level executives incorrectly is rude and disrespectful.  I’ve been told it’s not that big of a deal and it’s not the end of the world. Don’t worry about it?

I was set to write a different blog entry on this topic, one which focused at the heart of the issue – why my name is not being spelled correctly – but I landed on Google and did a search for the name Shanna and Shana.  Wow!  Both have some cool results!  So forget the fact that my name continues to be misspelled at work – look at what I found!

It turns our that the name Shanna was famous in Shanna the She-Devil of  Marvel Comics. I think that’s hilarious!!!  Look at how awesome she is – Dang!  Wish I was that voluptuous! According to Wikipedia: 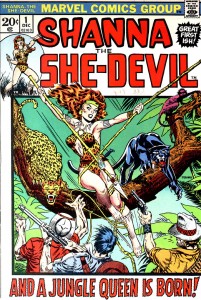 Shanna O’Hara Plunder is the daughter of a diamond miner named Gerald O’Hara. Born in Africa, she spent the majority of her childhood growing up in the jungles of Zaire. At the age of six, her father went to kill a rogue leopard that belonged to her mother, Patricia O’Hara. While hunting for the leopard, Shanna’s father accidentally killed her mother. This traumatic incident led to Shanna’s lifelong crusade against the use of firearms. After the incident, Shanna moved back to the United States to live with relatives. Shanna grows up to become an accomplished Olympic athlete, specializing in competitive swimming and track and field. She then became a licensed veterinarian.

My goodness!  I don’t think I can compare to that!  What a woman!

I also remember a really trashy romance novel I had for years on my bookshelf with the title Shanna.  Here’s the description from Amazon:

Behind the foreboding walls of Newgate Prison, a pact is sealed in secret — as a dashing and doomed criminal consents to wed a beautiful heiress . . . in return for one night of unparalleled pleasure.

In the fading echoes of hollow wedding vows, a promise is broken — as a sensuous free-spirit flees to a lush Caribbean paradise, abandoning the handsome stranger she married to the gallows. But Ruark Beauchamp’s destiny is now eternally intertwined with his exquisite, tempestuous Shanna’s. And no iron ever forged can imprison his magnificent passion . . . and no hangman’s noose will deny him the ecstasy that is rightfully his. 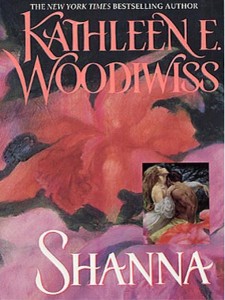 Very sexy stuff.  Written by trashy romance novelist Kathleen E. Woodiwiss in 1977, whose other titles include best sellers Ashes in the Wind, Forever in Your Embrace and Moonlight Enchantress.  (photo below) Goodness gracious!

Also for your reference, Wikipedia lists:

Shanna is an American feminine given name, and may refer to:

Shanna the She-Devil, a fictional jungle adventuress in the Marvel Comics universe

That’s quite a list!  But with S.H.A.N.N.A. posing such a challenge for some, I thought I would look up S.H.A.N.A to see if this version of my name had any fame attached to it.  And what do you know – Shana is a really awesome Japanese animae character!  Look at how cute she is (main photo above)! Shakugan no Shana means Burning-Eyed Shana. Her existence is a bit more complicated than the She-Devil:

The female lead of the show and a Flame Haze. Initially she is concentrated solely on her duty as a Flame Haze, going as far as to not bearing even a name. She sees Yuji only as a Torch, an object, marginally interesting because of his status as a Mystes. However, she slowly opens up to Yuji, coming to think of him as a person, despite being a Torch, and eventually comes to love him. Until she met Yuji, she was identified by only her Flame Haze title “Flame-Haired Blazing-Eyed Hunter,” or her nodachi, Nietono no Shana (贄殿遮那, “Vairocana of the Offering Room”). Yuji, in his need to humanize her, chose to name her “Shana” after her sword. 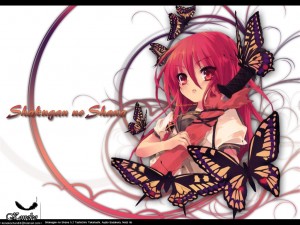 Shana has a habit of saying “Urusai! Urusai! Urusai!” which means “Shut up! Shut up! Shut up!” whenever Yuji asks her questions or makes remarks that disturb her original point of view. But in reality they really care for each other. She has a great fondness for melon bread. Shana later comes to the startling conclusion that she loves Yuji, and even confesses it to him in the last episode of the first anime series when she thought she was going to die, but he does not hear what she said. Shana is continually torn between her mission to protect the balance, and her love for Yuji. Due to a decision she made near the end of the first season of the anime version, the closeness they once had begun to erode as Yuji kept a distance from her because of it. Yuji adopts a viewpoint similar to Shana’s in the beginning of the series. However, Yuji comes to realize that he was wrong, and their relationship seems to be restored.

I love that she shouts “urusai” all the time. Poor little Shana seems to have issues with men. I totally identify with her!  ;p

While this complicated little j-heroine seems to be the only noteworthy Shana on the internet (save the town Shana in Tehran, Shana Banana who makes banana bread and Shana Morrison who is apparently a “famous” singer), I rather like her image and her feisty little character.  Considering my splendid five years in Japan and my connection with special eyes, I think I might just “go with the flow” and start using Shana with one N.  Of course the minute I do this, the owner will probably purposely start spelling it with two, just for kicks.