Just thought I would let you know…I have an appointment this Saturday with an agent to look at some houses.  I’m contracted and paid up until June, so that gives me a bit of time to hunt.  I’ll keep you posted!

The weather forecast said there would be a thunderstorm on Tuesday.  It just didn’t say that it would blow in at 4am!  And that it did.  The thunder was super loud and the lighting bordered on an electric storm.  I don’t sleep well during storms anyway, the pounding of the rain didn’t help lull me to sleep!

I find it very strange that my first instinct was to pop out of bed and check for roof leaks.  After the whole water heater incident, I clearly don’t have the greatest confidence that my apartment building is built soundly or with terrifically skilled workers.

Sure enough, with just a 45 minute storm, though it was a heavy downpour, several water spots appeared all over the house.  I’m glad I thought to take photos, it came in handy explaining it to the apartment management.

I met the “technicians” on Wednesday morning.  As it turns out, one was the plumber, which made me think that the crew didn’t understand that this wasn’t a pipe leak, but parts of the building that weren’t sealed properly.  I walked through the house, showing them the photos and the location of each leak.

I also showed them that the window that they sealed up in the living room, wasn’t properly sealed on the outside of the building.  I don’t know what the hell these people were thinking!  I serve enough as a teacher in my work in hospitality, I just don’t have it in me to teach someone why the construction of a building is not strong enough!  No one understood why I was knocking on the bedroom window seal, trying to explain that the area underneath the window is hollow.  They couldn’t hear the difference in sound when I knocked on different parts of the walls!

Of course, the security dude who I’ve locked out by changing the locks, took his golden opportunity to explore my apartment, opening the bathroom and bedroom doors to take his peak everywhere.  I should have yelled at him, but I’m somewhat fascinated by how curious he is about the apartment.  He looked around and then went back downstairs.

So, two scrawny little teenagers showed up this morning to get up on the roof and put down some more material over the bathroom.  That part was easy.  In the living room, another guy stood on a bucket on a chair and chipped away at the moldy part of my wall.  You can see in the pictures that one he exposed the brick, there was even one big hole that was never sealed up at all!  Yikes!

What ticked me off is that everyone planned to meet here Saturday and get everything done.  But I was told that they would come back Thursday to paint and fix the outside of the building.  I’m not happy about this.  I hate having to arrange my schedule to be home.  But they were not prepared to fix anything but the big hole in my living room wall.  And I can’t do a damn thing about it!

I sent an e-mail to the management asking them why they weren’t prepared.  It makes me feel better, but it is in vain.

Ms. Ngoc, our HR executive and I discussed this and the other things which have popped up since I moved in.  She strongly encourages me to find a new place to live. Since Ericsson employees occupy the rest of the building, I think they would be happy to have one more unit in the same building.  This would sure make it easy to break the contract.  While there is a part of me which does desire a better living situation, another part is not willing to go through a search and a move.  Yuck.  what a pain in the ass!

What would you do if you were me? 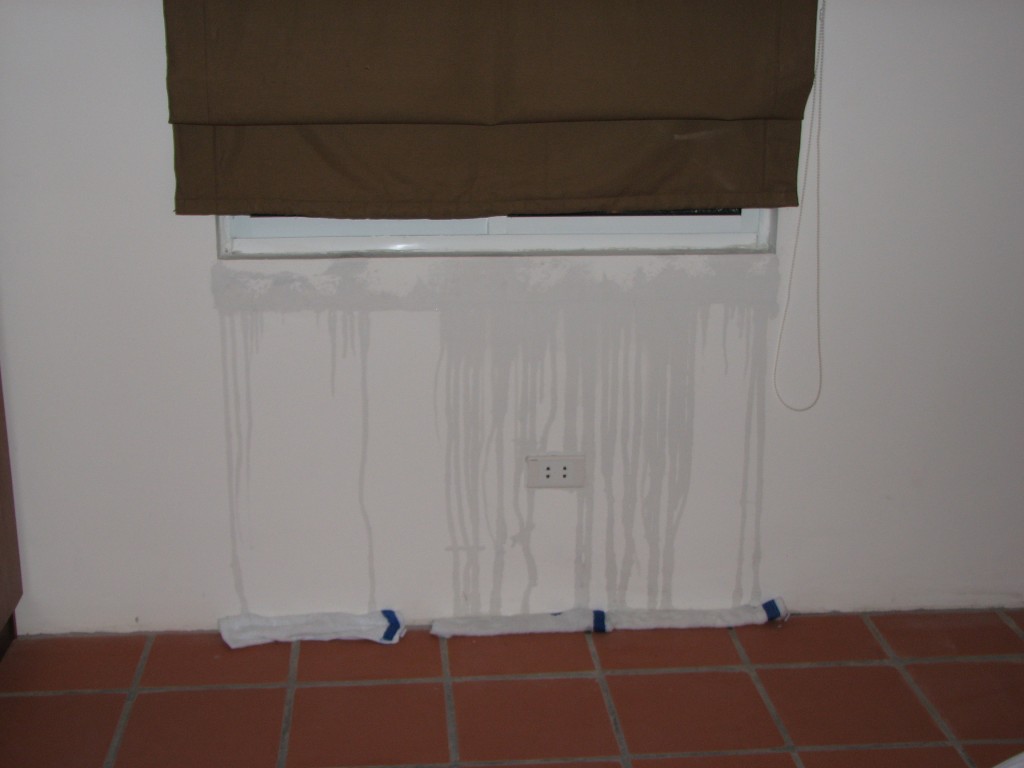 A window in my bedroom. A line formed and then the water just started dripping.  You can see the wall opening was too big for the window and improperly sealed.