November 25th, Dad and I went to the US Post Office with 10, perfectly wrapped and labeled boxes.  Inside were some clothes, my CDs, household stuff and many of the gifts I received from my friends in Japan.  We anticipated sending the boxes via surface mail, which usually takes a couple of months.  But upon arrival at the post office, we were told that that surface has been canceled.  So we opted for the cheapest – 10 day priority mail.  And paid on average $130 per box.  Ouch.

I don’t have much in life – in terms of ‘things’ anyway.  In fact, aside from what you see in this photo, I have an antique dresser and table, and 8 plastic bins in storage, mostly filled with childhood mementos and oodles of photos.  Oh – and I refuse to throw away my high school and college formal dresses.  Just can’t do it!  But that’s it.  Before I left for Japan, I had a huge yard sale and felt so liberated in getting rid of my ‘stuff’.  And I lived pretty simply in Japan.  I like to keep it that way.  I did manage to collect a few things in Japan, and certainly was given a number of beautiful gifts upon my departure.  I also packed up keepsakes from my travels, college and more. The items in the boxes are my favorite treasures.

In the suitcases were all of the things I felt that I would need sooner rather than later.  And I packed so that all of my business clothes and shoes were in the blue suitcase, so that I could have easy access.  Good plan.  The suitcase system has worked out well, since in my dinky hotel room, I have no space to open all three suitcases.

As I am moving into my new apartment later this week – I am looking forward to spreading out and unpacking.  Except that my boxes have still not arrived.  It’s been nearly a month.  And I am trying to stay calm and not panic, but I’ve heard too many horror stories now.  A large part of me will be devastated (not to mention angry) if I never see these boxes, if the contents have been invasively examined/unwrapped, stolen or damaged.  I am also afraid of what taxes I may have to pay, simply because it’s a good chance to make some money, not because I am actually brining anything new or valuable to the country.  I also have to laugh because I hope they don’t open the two vacuum bags of clothes – won’t that be a shock for them when the stack magically poofs up to 4x the size!  How will they get those clothes back in the box?

I’m not holding my breath, but I will hold out hope that these boxes arrive soon.  I’m having Dad check with the US Post Office to see if they were logged in in Vietnam.  After that, there’s really nothing else for me to do but wait.  Patiently.  Please.  Toto, we are SO not in Kansas anymore! 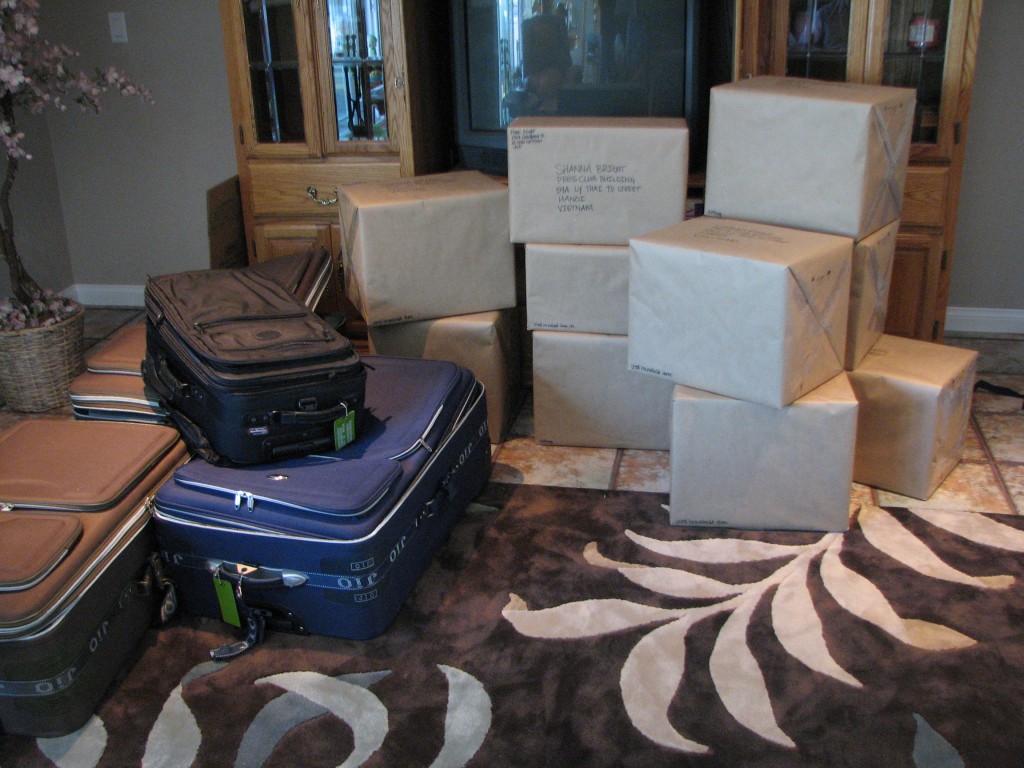 My worldly possessions – My suitcases and boxes, safe and sound in my parents’ living room.  Can you guess which four items have made it to Vietnam and which ten haven’t?